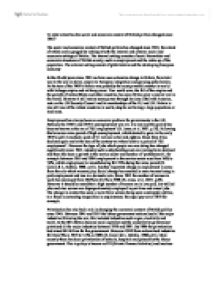 To what extent has the social and economic context of British politics changed since 1945?

To what extent has the social and economic context of British politics changed since 1945? The social and economic context of British politics has changed since 1945, the extent of which can be gauged by looking at both the internal and external social and economic settings of Britain. The internal setting consists of social hierarchies and economic structures of British society, such as employment and the make up of the population. The external setting consist of globalisation and the developing European economy In the 60 odd years since 1945 we have seen extensive change in Britain, from total war to the war on terror, empire to European integration and growing globalization. At the turn of the 1900's Britain was probably the most powerful country in world with its huge empire and military power. Two world wars, the fall of the empire and the growth of United States and other countries, has seen Britain play a smaller role in the world. However it still retains some power through its close links with America, veto on the UN Security Council and its memberships of the EU and UN. Britain is also still one of the richest countries in world, despite not having a large population or land mass. ...read more.

Jones, et al. 2007. p.74). Although living standards are higher there are still a number of inequalities within our population as there was in 1945. Another change in the make up of the British population since 1945 is the growth in which Britain has become multi-ethnic and multi-cultural. The most notable large scale migrations came in 50's and 60's from the West Indies and Indian sub-continent. This brought new religious and racial identities to Britain and for the first time there was the idea of an ethnic minority, by 2001 the number of people describing themselves as belonging to an ethnic minority was 8% of the population (B. Jones, et al. 2007. p.74). The idea of separate nations and regions has an impact on the social and economic context of British politics. There are inequalities within Britain and there is what is referred to as the 'north/south divide'. In the 1980's there was growing economic divisions between the prosperous 'south' and northern regions such as the north west of England and Scotland. For example, for income as a percentage of the UK figure, in 1994 the south east was 117%, where as the percentage for Yorkshire and Humberside was 89% in the same year (B. Coxall & L. ...read more.

Since 2005 there has been 2.7 million new jobs created in Britain, 52% of which went to foreign workers, many of whom came from the new EU countries (Scotsman 2007). These foreign workers, in many instances have got jobs at the expense of unemployed British people. In conclusion the social and economic context of British politics has changed to a notable extent since 1945. Important structural changes have occurred in Britain's economy and there has been a shift from manufacturing and traditional industries, to a more service driven economy. In addition to this there has been a transfer from public ownership to privatisation started by the conservative government in 1979. The commonwealth plays a less significant role in the economy and trade has been switched away to the EU and other markets. Globalisation has also had an effect on our economy since 1945, as our economy has been increasingly depended on world markets and events else where. Class remains important in British society however there has been a decline in the working class and a growth of the middle class and although differences have become smaller inequalities still exist. Since the 60's divisions along the lines of race and religion have become more important due to immigration and the growth in ethnic minorities. Nation and region have gained more significance and devolution in Scotland and Wales have took away some of Westminster social and economic powers. ...read more.