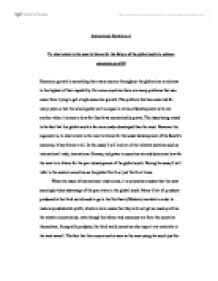 To what extent is the west to blame for the failure of the global south to achieve economic growth?

International Relations A To what extent is the west to blame for the failure of the global south to achieve economic growth? Economic growth is something that every country throughout the globe aims to achieve to the highest of their capability. For some countries there are many problems that can occur from trying to get a high economic growth. The problem that has occurred for many years is that the whole globe isn't as equal in terms of development with one another when it comes to how far they have economically grown. The issue being raised is the fact that the global south is far more under developed than the west. However the argument is, to what extent is the west to blame for the under development of the South's economy, if any blame at all. In this essay I will look at all the relevant sections such as international trade, international finance, aid given to countries etc and determine how far the west is to blame for the poor development of the global south. During the essay I will refer to the western countries as the global North or just North at times. When the issue of international trade arises, it is somewhat evident that the west seemingly takes advantage of the poor state in the global south. Many if not all products produced in the third world need to go to the Northern (Western) markets in order to make any substantial profit, which in turn means that they will not get as much profit as the western countries do, even though the labour and resources are from the countries themselves. ...read more.

The history between the Western Countries and the Global South explains to a certain extent the reason for the south being so under developed in comparison to the global North. There is a big gulf in economies in relation to North, South e.g. Britain's Economy in comparison to Africa's economy. The reason I have used Britain as an example is because of historical relevance. When the British empire emerged in the eighteenth and nineteenth century and stayed until after the second world war, it caused many problems for a lot of the Southern states, which are still to this day feeling the effects from what happened many years ago. Britain along with many other imperial powers throughout Europe used countries in the south as sources of raw materials and as cheap labour. The fact hat this occurred gives evidence to suggest that the west are to blame for the underdevelopment in the global south due to the fact that with so much of the raw materials being taken away from the start, it left the western states with a high advantage and a head start in building a strong economy whereas the south now is still feeling the repercussions of it. Decolonisation was also a problem that caused the global south to rely upon the help of the global west to run their economy to an extent. When decolonisation occurred through the global south, what this meant was that many countries from the North left countries in the global south with many problems which they found hard to deal with, e.g. ...read more.

out of the economic deprivation which it is suffering Also although much of the global South is plagued by violence and terror with large organisations trying to overthrow the government etc, surely to help themselves everyone should try to pull in the same direction. Can someone be helped if they don't help themselves? Overall in conclusion to the question, to what extent is the West to blame for the failure of the South to achieve economic growth? I would have to say that I believe that blame can be emphasised on both sides. Wallerstein believes that the core states use the periphery, the south for cheap raw materials and cheap labour. Therefore it is evident that a reason that the South is so economically underdeveloped is because of the way the system works today. It is clear that the west take advantage of the south in order to further their prosperity and economy however, still nothing is done about it in the way of new stricter laws etc. However although the West is to blame for taking advantage of the global South's underdevelopment, the south has not helped itself in fighting back or trying to create a better economy for itself. Lack of innovation due to the reliance of western products has not helped the south but has just left them stuck with the same problem. Therefore to sum it all up, the west to a large extent is to blame for the failure of the south to achieve economic growth but the south is to blame too. ...read more.