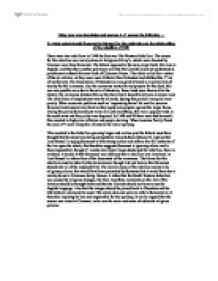 To what extent should Somerset be blamed for the outbreak and the mishandling of the rebellion of 1549.

Using your own knowledge and sources A-F, answer the following ... To what extent should Somerset be blamed for the outbreak and the mishandling of the rebellion of 1549 There were two rebellions in 1549 the first was The Western Rebellion. The reason for this rebellion was mainly down to Religious Policy's, which were directed by Cranmer more than Somerset. The Rebels opposed to the new prayer book, this was in English, and therefore another grievance was that the Cornish could not understand it, parishioners refused this new book of Common Prayer. The rebels called for a return of the six articles, as they were more Catholic than Protestant and disliked the 1st act of Uniformity. The Dissolution of Monasteries was greatly hated as it proved lots of charity for the commons, also the commons wanted to say prayers for the dead, this was not possible now due to the sale of chantries, these lands were then sold to the Gentry, the commons detested this as they believed it should have been common land. The main form of employment was the tin trade, during this period it was paid very poorly. Other economic problems such as 'engrossing farms' hit smaller yeoman farmers (land owners) very hard as they could not compete against the larger farms. ...read more.

of the gentry and that the gentry was suppressing them with inflation/high rents (point 2 on the list of grievances comments on which were placed by the "lord of the manour" and suggest that the Lords were abusing their rights and powers) / and no rise in wages. Source C's position is based on protestant ideas, this is implied by point 4, "that priests form hensforth shall purchase no londs." And the "lands that they have in possession may be letten to temporall men.". Somerset is largely responsible for the economic problems which inflamed the commons in to rebellions. Somerset was seen as sympathetic and a humanitarian but did nothing to stop price inflation, or prevent the Nobles and Gentry from lowering wages. Somerset continued to debase the coinage, this therefore weakened currency and discouraged trade. However many economic problems were down to Somerset inheriting debts and a severe lack of Crown revenue. This lack of revenue and reduced trade meant that with poor harvests and the recovering/increasing population there were limited food supplies. Somerset was criticised by William Paget, for being to sympathetic, Paget states Lord Protector was "soft" and being to "good to the pore (poor)" this implies that Somerset's attitude towards the situation was to soft and not approved of by his colleagues. ...read more.