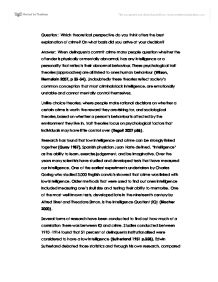 Question: Which theoretical perspective do you think offers the best explanation of crime? On what basis did you arrive at your decision? Answer: When delinquents commit crime many people question whether the offender is physically or mentally abnormal, has any intelligence or a personality that reflects their abnormal behaviour. These psychological trait theories (approaches) are all linked to ones human behaviour (Wilson, Herrnstain 2007, p 33-34). Undoubtedly these theories reflect society's common conception that most criminals lack intelligence, are emotionally unstable and cannot mentally control themselves. Unlike choice theories, where people make rational decisions on whether a certain crime is worth the reward they are risking for, and sociological theories, based on whether a person's behaviour is affected by the environment they live in, trait theories focus on psychological factors that individuals may have little control over (Regoli 2007 p86). Research has found that low intelligence and crime can be strongly linked together (Quay 1987). Spanish physician Juan Harte defined, "intelligence" as the ability to learn, exercise judgement, and be imaginative. Over the years many scientists have studied and developed tests that have measured our intelligence. One of the earliest experiments undertaken by Charles Goring who studied 3,000 English convicts showed that crime was linked with low intelligence. Older methods that were used to find out ones intelligence included measuring one's skull size and testing their ability to memorise. ...read more.

I myself did not know what an, 'id' was before further investigation? There are not many empirical tests and there is no compelling evidence that suggest psychoanalytic theories effect criminal behaviour. Another theory of personality created by Hans Eysenck focused on three significant functions of personality - psychoticism (P), neuroticism (N), and extraversion (E). Eysenck developed a personality questionnaire where results determined certain traits connected with the three temperaments. Those who scores reflected Psychoticism, are likely to be aggressive, careless, uncompassionate, manipulative and troublesome. High extraversion scorers are likely to be, irresponsible, social, optimistic, active and impulsive. High neuroticism scorers are likely to be, anxious, depressed, restless, rigid and moody. People who scored high on all three temperaments were likely to have a greater chance of antisocial behaviour while those who scored low on all three temperaments, had a smaller chance of committing criminal behaviour (Feldman 1993). Researchers continued to perform tests that showed how personality was linked with criminal behaviour. Criminologists, Eleanor and Sheldon Glueck used Hermann Rorschach inkblot test, which is still currently used in forensics to determine the personality traits of people, on a group of a thousand youths. 500 of them were delinquents and the other 500 were non delinquents. Results from the test showed that those in the delinquent group had personality problems which made them feel dejected and unstable. ...read more.