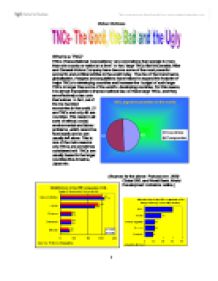 Transnational Corporations - the Good, Bad and the Ugly Formatted

What is a TNC? TNCs (Trans-National Corporations) 'are corporations that operate in more than one country or nation at a time.' In fact, large TNCs like McDonalds, Nike and General Motors Company have become some of the most powerful economic and political entities in the world today. The rise of the brand name, globalisation, mergers and acquisitions have helped to expand the footprint of major TNCs to developing countries and increase the budget of such large TNCs to larger than some of the world's developing countries. For this reason, it is almost impossible to impose national law on these large TNCs, and they are effectively a law unto themselves. In fact, out of the top hundred economies in the world, 51 are TNCs and only 49 are countries. This leads to all sorts of ethical, social, environmental and labour problems, which cannot be fixed easily and so are usually left alone. This is one of the main reasons why TNCs are sometimes considered evil. TNCs are usually based in the larger countries like America, Japan etc. (Sources for the above: Fortune.com, 2002 Global 500, and World Bank, World Development Indicators online.) The Structure of a TNC The corporate structures of TNCs can be divided into two main sections, but there are infinite variations of a TNC's structure. The two main sections are horizontal corporate structures and vertical corporate structures, * TNCs have offices and outlets all around the world that produce similar products. ...read more.

Changing Countries Many major TNCs have moved their manufacturing facilities offshore to cheap, low wage countries. This has resulted in unemployment and social upheaval, for example recent riots in France and in the United Kingdom, not to mention the rust belt in the US which has gone offshore and left workers stranded with little or no income and dependant on the state. This is very good for the balance sheets of corporations, but this shifts power away from the governments and makes the global economy far less stable. Individual country economies are also affected negatively. Social Relations In Western countries, unskilled or low skilled members of the population (and many country's immigrants) have lost their jobs in manufacturing as mentioned above, but the places these TNCs have moved their manufacturing facilities have their own social problems, which are often made worse by TNCs. Having said this, there are some advantages. Advantages Disadvantages Know How - TNCs have the technical ability to exploit natural resources. For example, an oil company goes to an undeveloped place, they have the resources and the capacity to develop the economy of the host country in such a way that is not possible by the host country alone. Exploitation of low environmental standards - In underdeveloped countries, the governments are often weak and the environment is not their priority, and often the governments are willing to ignore the environmental woes of the TNCs because of their superior economic benefits Capital - They have capital available for investments which an undeveloped country may not be able to tap. ...read more.

Some examples of companies Rank TNCs Revenues Profits Countries which they operate in 1 Exxon Mobil (Oil company) 339,938 36,130 83 2 Wal-Mart Stores (shopping company) 315,654 11,231 4 3 Royal Dutch Shell 306,731 25,311 143 4 BP 267,600 22,341 160 5 General Motors 192,604 -10,567 Global TNCs - Conclusion - evil empires, businesses or angels? There can be no doubt that TNCs have mixed impacts on the world economy. They introduce new markets to struggling economies, help developing countries, and get huge profits for themselves. However, they put small to medium homegrown businesses in developing, developed and first world countries into a desperate race for survival that they, more often than not, lose and the TNCs, unavoidably, win. However, the business of business is business (Milton Friedman) and the sole purpose of a TNC is to make profit, and it is extremely unlikely that these TNCs endorse child labour, but it is the subcontractors that engage in such "evil" acts as recruiting child labour. As regards cheap labour, in many cases it is the only or best paid labour around and the workers are often happy to do it; it is only the worst cases that reach our ears. Transnational corporations are nothing more than huge businesses that want to get money any way they can. TNCs have no evil intentions, nor have they good intentions. They just have business minded intentions. ...read more.