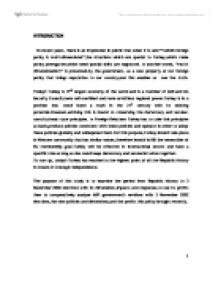 INTRODUCTION In recent years, there is an impression in public that when it is said "Turkish foreign policy is multi-dimensional",the situations which are special to Turkey,which make policy prerogative,which need special skills are neglected. In another words, "multi-dimensionalism" is presented,by the government, as a new property af our foreign policy that brings reputation to our country,and this enables us see the truth. Today's Turkey is 17th largest economy of the world and is a member of G20 and Un Security Council,more self-confided and more ambitious regional power.Turkey is in a position that could leave a mark in the 21st century with its existing potential.However,achiving this is bound to conserving the democracy and secular-constitutional state principles. In Foreign Relations Turkey has to take this principles as basis,produce policies consistent with these policies and operate in order to adopt these policies globally and widespread them.For this purpose,Turkey should take place in Western community that has similar values,therefore should fulfill the necessities of EU membership goal.Turkey will be effective in international extent and have a specific role as long as she could keep democracy and secularism alive together. To sum up, today's Turkey has reached to the highest point af all the Republic history in means of strategic independence. The purpose of this study is to examine the period from Republic history to 3 November 2002 elections with its dimensions,impacts and responses,to see its profits then to comperatively analyse AKP government's revisions with 3 November 2002 elections,the new policies and dimensions,and the profits this policy brought recently. I. TURKISH FOREIGN POLICY OF ATATURK PERIOD (1923-1938) Basic Principles of Turkish Foreign Policy of Ataturk Period The main goal of the National Struggle Period in foreign policy was to introduce the new Turkish State in international field, that, this - in a sense- formed the foreign policy principles of The Republic of Turkey during the foundation period. Turkey's gaining legitimacy in the international field as a national state in modern meaning was with the Lausanne Conference. ...read more.

In the conference, Soviet Union asked for military bases in the Straits by indicating that the Straits' situation was only a two-sided matter which concerned the Soviet Union itself and Turkey. A year after the Potsdam Conference, on 8 August 1946, Soviet Union gave a diplomatic note to Turkey including opinions about the Straits. In this diplomatic note Soviet Union suggested that Montreux Convention was inadequate in assuring the security of Black Sea states because of the events occurred in World War II. So, proposed that the privilege of editing the transition regime of the Straits should belong to Turkey and Black Sea states, and that the Straits should be defeated jointly by Turkey and the Soviet Union. Turkey, who negotiated with U.S. and England after this diplomatic note, rejected this request. After that, Soviet Union repeated the same requests by giving a second diplomatic note on 24 September. In this environment, Turkey searched for the support of England, with whom it was allied since 1939, and the United States, who emerged as the most powerful state of the world at the end of the war, with the aim of protecting its independence and territorial integrity against the Soviet threat. But at the beginning she couldn't find the needed support both because Turkey remained neutral at the war and because the Soviet behaviors that provoked a major concern in Turkey didn't provoke the same reaction in West. However, when Turkey was seeking for U.S.' diplomatic support, civil war began in Greece and at the same time, depended on that, a threat of communism emerged. Meanwhile, England, giving military aid to Turkey and Greece since World War II, declared that she could not continue to help this states by giving a memorandum to U.S. on 21 February 1947. England proclaimed that independence of those states is important in terms of defense of Western world, therefore, U.S.' ...read more.

In addition ,Turkey's peaceful attitude was pointed as an example and become one of the most important elements that improved relations with EU. Conclusion Here, I turn back to what I said at beginning of the article: It is too early to subject AKP's foreign policy for a general analysis. Moreover, when the AKP came to power the political environment was very negative and all these negative things saddled with the party. Its hard for a state that has more than 250 billion dollars debt to be strong in foreign policy. However, it can be said that,up to now, AKP's foreign policy conducted in accordance with Turkey's basic (and ideal) principles of foreign policy:Westernism,keeping the Status Quo and Legitimacism. These 3 examples that we examined suggests the same thing. Its appropriate to Westernism as EU-axis policy was followed without a compromise and strongly. Its appropriate to keeping the Status Quo and Legitimacism because the problem was solved not with a kind of annexation but with a EU-U.S.-UN axed international solution.("protecting the borders the same" and "avoiding from irredentism").Also, they paid close attention in protecting the "protecting the borders" line of keeping the Status Quo,because ,AKP both keep the relations with "eastern" countries,especially Iran and Syria, and rejected U.S' mentioning them as "terrorist state" and wanted to balance U.S. by approaching EU. In addition, they tried ,as possible it is in such an environment,to raise the political autonomy against U.S. by declaring that if the 8,5 billion dollars loan isn't freed from the political term of "Turkey's not invading to Iraq stand-alone",they wouldn't use it. All these are vital for a strategic country like Turkey in means of SMS. This quest for balance in Turkey, in such a country walking on a string all time, seems to depend on both AKP's domestic performance,especially in economy,and on the other hand, on the success that AKP will show in approaching to EU. Conclusion of conclusion: I am convinced that AKP's foreign policy suits to the historical lines,with the shape that is implemented up to now,and is positive. 1 ...read more.