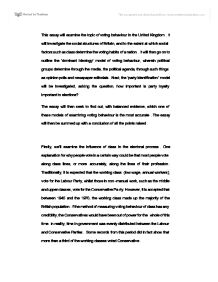 This essay will examine the topic of voting behaviour in the United Kingdom. It will investigate the social structures of Britain, and to the extent at which social factors such as class determine the voting habits of a nation. It will then go on to outline the 'dominant ideology' model of voting behaviour, wherein political groups determine through the media, the political agenda, through such things as opinion polls and newspaper editorials. Next, the 'party identification' model will be investigated, asking the question, how important is party loyalty important to elections? The essay will then seek to find out, with balanced evidence, which one of these models of examining voting behaviour is the most accurate. The essay will then be summed up with a conclusion of all the points raised. Firstly, we'll examine the influence of class in the electoral process. One explanation for why people vote in a certain way could be that most people vote along class lines, or more accurately, along the lines of their profession. Traditionally, it is expected that the working class (low wage, annual workers), vote for the Labour Party, whilst those in non-manual work, such as the middle and upper classes, vote for the Conservative Party. However, it is accepted that between 1945 and the 1970, the working class made up the majority of the British population. ...read more.

Indeed, the media commissions most polls. During the 45-day election campaign in 1997, 44 sets of national poll results were published in the national press (Butler and Kavanagh 1997, p. 123 and Crewe 1997) This was a smaller number than the number published during the much shorter general election campaign of 1992. According to Kavanagh (1992), the polls had a reasonably good record of accuracy at general elections up to 1970, but, after 1970, polls were inaccurate in five of the following seven elections. Even so, Eatwell (1993) has calculated that the average margin of error for the final polls between 1945 and 1987 was only 1.3%. This is an impressive record, especially given that the polling organisations themselves stress that in general elections with a sample of around 1000 respondents there is a margin of error of plus or minus 3%. It should be noted that polls conducted during by-elections are usually less accurate because there is often a greater degree of volatility in voting behaviour compared to that in a general election. According to Sanders (1993), the question of the accuracy of the polls during the 1992 general election boiled down to one or both of the following - either the polls were correct at the time they were conducted (and late switching took place) ...read more.

Equally, during the period between the 1992 and 1997 general elections, the Labour vote in the middle class Conservative heartlands of the South East went up by more than 14%, while the Conservative vote went down by over 12%. One way of explaining this rapid increase in the Labour vote is that it is in this area that much of the then new, hi-tech, non-unionised industries were based, and it was this group of skilled working class voters who deserted Labour in droves in 1979 and throughout the 1980s (Dorey 1998, p. 95-6). It is this example of class dealignment that has led to the revision of the old consensus that working class voters vote Labour and middle class voters vote Conservative. In conclusion, one explanation for voting behaviour is that most, but definitely not all people vote accordingly to their class interests. From 1945 to 1970, nearly two-thirds of all people voted for their natural class party. Since the 1980s there is open discussion between political scientists whether 'class dealignment' has taken place. In respect to the 'dominant ideology' model, that pollsters have an almost completely unreliable reputation for accuracy, and it became clear during the 1997 general election that the changes made by the polling organisations between this time had not solved the problem of faulty sample designs, late swings and non-registration. To sum up, it is un-controversial to say that there is no conclusively 'perfect' system of determining voting behaviour. ...read more.