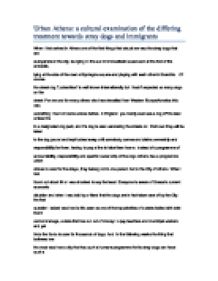 Urban Athens: a cultural examination of the differing treatment towards stray dogs and immigrants

Urban Athens: a cultural examination of the differing treatment towards stray dogs and immigrants When I first arrived in Athens one of the first things that struck me was the stray dogs that are everywhere in the city, lounging in the sun in Monastiraki square and at the foot of the acropolis, lying at the side of the road at Syntagma square and playing with each other in Exarchia. Of course the street dog "Loukanikos" is well known internationally but I hadn't expected so many dogs on the street. For me and for many others who have travelled from Western Europe/America this was something I had not come across before. In England you hardly ever see a dog off the lead unless it is in a designated dog park, and if a dog is seen wandering the streets on their own they will be taken to the dog pound and kept locked away until somebody comes and claims ownership and responsibility for them, having to pay a fine to take them home. Instead of a programme of accountability, responsibility and specific ownership of the dogs Athens has a programme which strives to care for the strays, they belong not to one person but to the City of Athens. ...read more.

If a country has a common enemy then the population becomes stronger as a community, the isolation felt by Greece strengthens the ties within Greece. These points lay the basis of nationalism and identity for Greek state - ethnic origins, orthodoxy, and cultural heritage of Hellenistic past (Christopoulos,)6. This history produces part of the habitus (Bourdieu)7 which in turn produces individual and collective practices in accordance with the schemes of history. It is important to look at "webs of meaning" (Geertz 1973)8 created and transmitted in the course of social interaction, the habitus of the people who live in Athens. Bourdieu uses habitus as a concept for understanding society; it refers to the learned, fundamental, deep-founded, unconscious beliefs, and values, taken as self-evident universals, that inform an agent's actions and thoughts, therefore it is useful to look at the day to day interpretation of the set of social structures within which Athenian citizens live. Broome9 identifies the cornerstones of Greek society to be religion, family and village culture. Even though Athens is a city, it is still the case that people identify strongly with the village community, family and neighbours are very important to Greeks from what I have experience. ...read more.

In this essay I have tried to find a cultural explanation for the treatment of stray dogs in Athens and to briefly look at why stray dogs are treated with more care than immigrants and have attempted this through looking at the cornerstones of Athenian habitus, that of family and community. The programme for the stray dogs embraces them as part of the community; they are seen as an ally, a member of the neighbourhood - an element emphasized through the tendency of stray dogs to stick to one area of territory. Opposed to immigrants who are seen as the invader, the foreign strangers, and through looking at Greek history of invasion I have tried to explain the modern notion of nationalism and community for those that fall into the category "Greek" therefore giving an explanation to the treatment of immigrants who do not fall into this category. The state in Greece has had to find acceptable ways to spend money; to the benefit of employees and suppliers. Caring for stray dogs employ a number of people and benefit local suppliers without angering voters making it good for all in the community whereas caring for foreigners in tough economic times is unacceptable to Greek voters, it sacrifices the good of the community for the sake of strangers. ...read more.