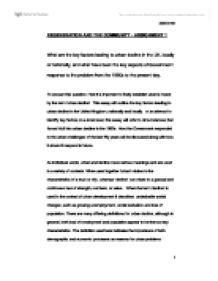 REGENERATION AND THE COMMUNITY - ASSIGNMENT 1

What are the key factors leading to urban decline in the UK, locally or nationally, and what have been the key aspects of Government response to the problem from the 1960s to the present day.

To answer this question I feel it is important to firstly establish what is meant by the term ‘urban decline’. This essay will outline the key factors leading to urban decline in the United Kingdom, nationally and locally. In an attempt to identify key factors on a local level, this essay will refer to circumstances that forced Hull into urban decline in the 1960s. How the Government responded to the urban challenges of the last fifty years will be discussed along with how it should it respond in future.

As individual words, urban and decline have various meanings and are used in a variety of contexts. When used together ‘urban’ relates to the characteristics of a town or city, whereas ‘decline’ can relate to a gradual andcontinuous loss of strength, numbers, or value.  When the term ‘decline’ is used in the context of urban development it describes undesirable social changes, such as growing unemployment, social exclusion and loss of population. There are many differing definitions for urban decline, although in general, both loss of employment and population appear to be the two key characteristics. The definition used here indicates the importance of both demographic and economic processes as reasons for urban problems:

a continuous reduction of employment as well as an enduring loss

of population; both processes are interrelating and are accompanied

by rising social and physical problems. Often these processes are

In recent decades many urban areas of Britain have experienced social, physical and economic deterioration of their environments. There appears to be no single cause for all urban problems although the main factor of neighbourhood decay is often related to the local economy (Lang, 2005).

The decline of industry in past decades has had devastated effects on communities. The mass levels of unemployment, lack of opportunities to retrain and a shortage of alternative local employment have left many neighbourhoods facing poverty and entirely dependent on state benefits.

Furthermore, people of working age tend to define themselves by their work and their work life responsibilities.

Poverty and unemployment can intensify a whole range of social issues, such

move to live elsewhere. These factors hasten decline and cause the

A further issue relating to the closure of industrial sites is the empty buildings, derelict factories and plants. These sites at one time would have formed the skyline of cities and towns but when left to decay become hazardous and an eyesore. Imrie and Raco (2003: 64) refer to ‘Urban legacy’ in which the industrial age is often ‘blamed for the severance of people and place in towns and cities’.  The DETR 1999a report of the Urban Task Force (chaired by Lord Rogers) provided a framework for future policy initiatives concerning the decline and loss of control of Britain’s towns and cities. Rogers states that:

since the industrial revolution we have lost ownership

of our towns and cities, allowing them to become spoilt

Furthermore Roger refers to how the pollution and slums of industrial cities have led to negative attitudes and a lack of confidence in urban life (Imrie and Raco, 2003).

Since the 1960’s many towns and cities have experienced the deterioration of their social, economic and physical environments. The ways in which towns and cities are affected differs greatly and depends on the characteristics and structure of the local industry. However, in many cases deindustrialisation and broad processes of economic restructuring have been closely tied in with such deterioration (Champion, 1989). An example of this is Glasgow, between 1971 and 1983 more than seventy seven thousand manufacturing jobs were lost (Champion, 1989). Glasgow’s traditional industries were replaced with information based industries but the former manufacturing work force found it difficult to adapt. This led to high unemployment in the inner city areas which were poorly designed neighbourhoods, particularly associated with the high rise flats built in the 1960’s. A combination of the two, resulted in a cycle of social and environmental decline in Glasgow (Champion, 1989).

The problems facing cities in the United Kingdom have been an issue of public debate for the past forty years. It is said that poverty was officially rediscovered in Britain in the1960’s as was the need for government intervention. The National Community Development Project (CDP) was just one of a series of government initiatives set up to tackle urban deprivation (Green and Chapman, 1992). Set up in 1969 by the Home Office the CDP was the only initiative to feature community work so greatly. The anti poverty programmes of the 1960’s were set up by the government to tackle huge social and economic problems however, there was little finance.  It was therefore approached from the outside, in a way that empowered local people to tackle problems and in time become responsible for their own communities (Green and Chapman, 1992).

It assumed that inner city problems were caused by

the individual failings of a limited number of people

who lacked the skills to succeed economically. In

The problems with the Urban Programme by the mid 1970’s became more apparent and therefore the Labour Government’s 1977 White Paper, The Inner Cities, led the way to a major shift in policy. One year on and the Government changed the policy ‘to accommodate a new understanding of urban change’ (Parkinson, 1996: 8). The new policy concentrated on the economic causes of decline as well as social factors. The policy also acknowledged that there was a need to create wealth within cities ‘to form a platform for urban regeneration’ (Parkinson, 1996: 8). With programme funds extended and welfare services set up to reach the outskirts of mainstream cities optimism was high. Despite the great efforts from both the government and public by the mid 1980’s the initiative had run a ground partly due to the new Conservative Government cutting support for a labour initiative (Parkinson, 1996).

After the Conservative Party won the election in 1979 the delivery of welfare continued to be seen as vital. During the 1980’s the Government encouraged a new response to urban decline and out of that came ‘private sector led urban entrepreneurialism’ (Parkinson, 1996: 9).

More attention was paid to local authorities than ever before, local services and finances were restructured and many new initiatives from central government were introduced, such as City Action Teams, Enterprise Zones and Task Forces.

During the 1980’s despite the Government denying intentions to decentralise Parkinson refers to how:

The government substantially increased the

its view that to regenerate the British economy it

had to reduce the public sector expenditure, especially

As Parkinson states, the Government minimised the local authorities

role in urban regeneration, which increased the roles of the public sector and central government. This led to the social side of the programme being less of a priority and the economic side was the main focus for funding.

In the early 1990’s pressures and criticisms of previous policies led the government in a different direction with regards to policy focus. City Challenge and the Single Regeneration Budget (SRB) had different features from policies of the 1980s. The City Challenge and SRB recognised the need to hand decision making back to the local authorities. During this time ‘Partnership became the vogue word in policy making’ (Parkinson, 1996: 13), partners being the community and local government.

After eighteen years of Conservative rule, the 1997 general elections saw the defeat of John Major as Prime Minister and the Labour Party come to power. Labour came to government with a commitment to regenerate Britain’s cities by tackling social exclusion, neighbourhood renewal and community involvement. As Prime Minister, Tony Blair referred to the state of Britain’s cities, in particular how the gap ‘between the worst estates and the rest of the country’ had grown over the last two decades (Blair, 1998: 1, cited in Imrie and Raco, 2003: 4, original emphasis). Blair’s observations were just part of the broader unanimity that past policies had not only been unsuccessful, but had added to the inner city decline problem (Imrie and Raco, 2003).

The purpose of Urban Renaissance is to improve the appearance of cities in an attempt to encourage population. The mission statement for Lord Roger’s Urban Task Force was:

The Urban Task Force will identify causes of urban decline

in England and recommend practical solutions to bring people

back into our cities, towns and neighbourhoods. It will establish a

new vision for urban regeneration founded on the principles of

The Urban Task Force report was made 106 recommendations as to how the Government could improve cities. The Urban White Paper 2000; ‘Ourtowns and cities, the future’ was commissioned by the DETR, and was the government’s response to this report. A major issue which provided a background to the report was the use of Greenfield/Brownfield sites for additional housing (Cameron, 2001). This was based on a household growth forecast, published in 1995, suggesting that between 1991 and 2016 the UK will need to accommodate a further 4.4 million households (Cameron, 2001)

The Greenfield/Brownfield debate had previously been concerned with the issue of obtaining land for future housing needs and the ‘technical issues’ relating to the use of Brownfield sites for this purpose (Cameron, 2001: 3). Under the Urban Task Force this approach was not sufficient, and the reality was that this space must be put to use. The mission was to find more capacity to house people in urban areas and in doing so, make the areas more attractive so that people will choose to live in cities, thus improving city life. (Cameron, 2001)

The second key area of Labour’s urban regeneration policy is referred to as Neighbourhood Renewal and was defined by the report of the Social Exclusion Unit (SEU). The (SEU) report of 2000, suggests that there has been too much reliance on short term regeneration and that the government fails to utilise the knowledge and energy of local people (SEU, 2000). The SEU also implied that urban decline was characteristic to factors such as ‘lack of leadership’ and not enough attention to the problems of poor education, high unemployment and crime (SEU, 2000: 7).

The main aim of Neighbourhood Renewal was to tackle the problems in the most deprived areas, such as community breakdown, poor schooling, unemployment, crime and drugs. Firstly, the strategy looked at past initiatives that had failed, it emerged that the emphasis was mainly on ‘bricks and mortar’ rather than the people living within the community (Cameron, 2001:4)

Spending on buildings alone without investing in the people who live there was criticised and led to a reduction in spending on housing and an increase in ‘people focussed’ services (Cameron, 2001: 4). The focus on people services was carried through and new initiatives were put into practice. Examples of these included: Sure Start: childcare, family support and early learning for young children in deprived neighbourhoods (Cameron, 2001).

Education Action Zones: Typically covering secondary schools and feeder primary schools in areas of under-achievement or disadvantage (Cameron, 2001). New Start: Aimed in an attempt to re-engage 14-17 year olds who have dropped out of education (Cameron, 2001).