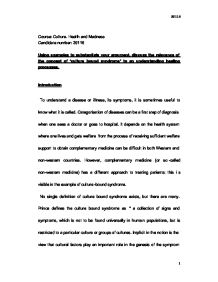 Using examples to substantiate your argument, discuss the relevance of the concept of 'culture bound syndrome' to an understanding healing processes.

Course: Culture. Health and Madness Candidate number: 39118 Using examples to substantiate your argument, discuss the relevance of the concept of 'culture bound syndrome' to an understanding healing processes. Introduction To understand a disease or illness, its symptoms, it is sometimes useful to know what it is called. Categorisation of diseases can be a first step of diagnosis when one sees a doctor or goes to hospital. It depends on the health system where one lives and gets welfare from the process of receiving sufficient welfare support to obtain complementary medicine can be difficult in both Western and non-western countries. However, complementary medicine (or so-called non-western medicine) has a different approach to treating patients: this is visible in the example of culture-bound syndrome. No single definition of culture bound syndrome exists, but there are many. Prince defines the culture bound syndrome as " a collection of signs and symptoms, which is not to be found universally in human populations, but is restricted to a particular culture or groups of cultures. Implicit in the notion is the view that cultural factors play an important role in the genesis of the symptom cluster" (198). However most of the psychiatric diagnoses are based on the Diagnostic and Statistical Manual of Mental Disorders of the American Psychiatric Association. The latest one is called DSM-IV, and the psychiatric cases that cannot be found in this category are often called culture bound syndrome. In other words, categorisation is already Western or American based. If culturally bound term can diagnose some diseases as culture bound syndrome, there could be another way around. So my argument through this essay will focus on the term culture bound syndrome, the convenient usage of the term in Western medicine. The inversion of culture bound syndrome theory, whereby phenomena like anorexia as seen as culturally-bound to Western cultures will be explored. Also this paradox could apply to the common psychiatric disease in North America, Attention Deficit Hyperactivity Disorder (ADHD). ...read more.

The question is whether this type of behaviour pattern that is considered a dysfunction in many Western cultures, is considered something entirely different in other cultures, and therefore anorexia exists around the world, but is prevalent in Western cultures because of certain Western cultural factors. (Kopiec). For example, the strong influence of Western mass media and advertised marketing, such as beauty advertising, are also frequently viewed as being implicated in triggering eating disorders in anorexia patients especially teenage girls, although it has recently come to light that there appear to be girls exhibiting anorexic behaviours in remote parts of Africa that have not been exposed to modern forms of advertising. These girls link their self-starvation to religious causes. Although usually associated with western cultures, the exposure to western media has caused the disease to appear in some third-world nations. Just as gendered factors such as sexual stress influence the onset of koro, the pressures upon western females - e.g. "the slim, youthful body is beautiful and healthy: the fat person is slovenly, ugly, prone to disease and lacks self-discipline" (Prince. 199) - influence women who live in western cultures. It is not only found in regionally western culture but also reported in the westernising countries like Japan and it shows that anorexia demonstrates that this disease may be endemic to Western cultures. (Kopiec). The Paradox of the Culture Bound Syndrome: the Case of Attention Deficit Disorder in North America Anorexia is an example that could be categorise as a culture bound syndrome and at the same time could be familiar to American Psychiatric Association. And the previous part of the essay demonstrated the intermediateness of the assumptions of culture bound syndrome. In this part, I shall examine a paradox, i.e. that the culture bound view of psychiatric phenomenon can be applied the other way around. A common disease in western culture can be a culture bound syndrome from the perspective of other cultures, e.g. ...read more.

It is quite ironic that some Western media promote Ayurveda but at the same time put pressure on people who are anorexic, for example. (Ibid. 45). The word 'homeopathy' is derived from the Greek 'homoios', meaning like and 'pathos', meaning suffering. The central principles of homeopathic medicine differ from those of Western medicine. Homeopathy is a holistic form of medicine where diagnosis takes into account the individual physical and emotional characteristics of the patient. Remedies are chosen to match the symptoms as closely as possible. The emphasis on prevention and one's involvement with one's own cure. Homeopathic remedies help the body to help itself. Homeopaths categorise each individual into constitutional types to assess which remedies will best suit them. The important point is that the background of a patient is important to match the remedy for the patient, not a background of their diseases. In Western medicine, it is the disease itself rather than the individual that it treated (Lockie: 2000. 8). Conclusion In these non-Western medication systems, categorisation is not an important tool to cure individuals, however for the health system like in the United States immediate diagnosis and categorisation of the disease are significant to cure individuals. However, my conclusion is that because of the idea of categorisation, there is always inclusion and exclusion: the borders of category. This abstraction bears the term culture bound syndrome. Categorisation is one of the convenient tools to offer medication in a particular society, but it is not useful and relevant for understanding the phenomenon. It is like seeing a painting through already coloured grasses. The birth of culture bound is already culture bound. " Perhaps, if a term is really needed for this collection of unusual disorders, we should simply stay with something like "folk psychiatric disorders", but only as a term of convenience and not of analysis" (Hughes. 12). Overall whilst it showed the contradiction of Western medicine and it may be useful to remedy western medicine, the term culture bound does not mean anything if the field of cure is non-Western. ...read more.