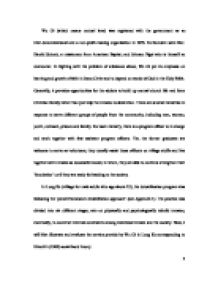 Wu Oi (which means mutual love) was registered with the government as an inter-denominational and a non-profit-making organization in 1976. Its founders were Rev. Harold Schock, a missionary from American Baptist; and Johnson Ngai who is himself an overcomer. In fighting with the problem of substance abuse, Wu Oi put its emphasis on learning and growth of faith in Jesus Christ and to depend on words of God in the Holy Bible. Generally, it provides opportunities for the addicts to build up normal church life and form Christian family rather than just help the inmates to abstention. There are several ministries in response to serve different groups of people from the community, including men, women, youth, outreach, prisons and family. For each ministry, there is a program officer to in charge and work together with few assistant program officers. Yet, the former graduates are welcome to serve as volunteers; they usually assist those officers on village stuffs and live together with inmates as successful model, in return, they are able to continue strengthen their 'foundation' until they are ready for backing to the society. In Long Ke (village for male adults who age above 25), the detoxification program was following the 'pencil framework rehabilitation approach' (see Appendix 1). The practice was divided into six different stages, aim on physically and psychologically rebuild inmates, eventually, to construct internal constraints among individual inmate and the society. Now, I will first illustrate and evaluate the service provide by Wu Oi in Long Ke corresponding to Hirschi's (1969) social bond theory. Belief As supplement to the 'belief' aspect of Hirschi's theory, Matza and Skyes (1961) ...read more.

Study from Skitka and others (2005) states that if those dissimilar attitudes pertain to our strong moral convictions, we dislike and distance ourselves from them all the more. Since belief belongs to the core value of a person, therefore, the discrepancy upon inmates and their relatives would definitely enlarge. Yet, while studies of newlyweds reveal that similar attitudes and values help bring couples together and predict their satisfaction (Luo & Klohnen, 2005), Singh and Ho (2000) concluded that dissimilar attitudes depress liking more than similar attitudes enhance it. Since inmates have to be separated from his girl friend or even his wife for at least a year, after such a long period of time if the couples found their life style are not in harmony with each other, the intimate relationship may be damaged even collapse. The unstable state of an important relationship then straightly increase strain and stress to the graduates and may prone to their relapse as if the situation is beyond their mental capacity. Difficulties Encountered by the Staff In Christianity we oppose abusing drugs, so we have gospel detoxification centres like Wu Oi. Nevertheless, in adopting the idea of Christianity we could not just take some of it instead of taking it as a whole set of moral belief. Cigarette, for example, is also prohibited in the village because of its nature is the same as abusing drugs for seeking pleasure and escaping pressures. In contrary DATCs under CSD allows its inmates to smoke, to have magazine with girls in bikini, to watch TV opera, etc. Due to the discrepancy of rules and expectations of inmates, argues has become daily routine among newcomers and coworkers. ...read more.

Inside the village coworkers, volunteers, and senior inmates would continuously share their beneficial experience through believing the God. Yet, for three times a day seven day a week all brothers are required to do Bible reading. Acceptance usually follows compliance; we may come to inwardly believe something we initially questioned. Moreover, group members who feel attracted to the group are more responsive to its influence (Sakurai, 1975). Sleep together, eat together, play together, brothers in the village easily make friends with each others. Human is social animal, no one like to be isolated. It turns out people do not like disagreeing with other group members. Fearing rejection by group members whom they allied, they allow them a certain power (Hogg, 2001). Unfortunately, neither through acceptance nor cohesion could a durable Christianity foundation be built in ones mind. And it must fail to resist back to back temptations inmates would faced everyday upon their graduation. Therefore, it is important for coworkers to remind and ensure brothers to growth spiritually in Christianity by their own will. Conclusion To sum up, apart from religious sanctions, God and the sentences in Bible also formed a bridge of miracle in the middle of inmates and their significant others. Yet, the bond holds and supports the inmates by generating a common belief, a set of conventional moral attitudes. As a result, the gospel rehabilitation treatment not only helps the inmates to abstain from substances and drugs, it also make fruitful contributes in reintegrating the inmates back to our society. All in all, regardless to what the participants may real want from the program, once they are in the site, it creates opportunity for God to start his work, so the ministry was valuable to continue but maybe more voluntary workers are needed in order to influence and reform new brothers more efficiently. ...read more.