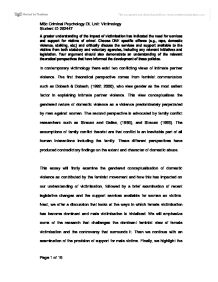 A greater understanding of the impact of victimisation has indicated the need for services and support for victims of crime'. Choose ONE specific offence (e.g., rape, domestic violence, stalking, etc;) and critically discuss the services and support available to the victims from both statutory and voluntary agencies, including any relevant initiatives and legislation. Your argument should also demonstrate an understanding of the relevant theoretical perspectives that have informed the development of these policies. In contemporary victimology there exist two conflicting views of intimate partner violence. The first theoretical perspective comes from feminist commentators such as Dobash & Dobash, (1992; 2000), who view gender as the most salient factor in explaining intimate partner violence. This view conceptualises the gendered nature of domestic violence as a violence predominately perpetrated by men against women. The second perspective is advocated by family conflict researchers such as Strauss and Gelles, (1986), and Strauss (1993). The assumptions of family conflict theorist are that conflict is an inevitable part of all human interactions including the family. These different perspectives have produced contradictory findings on the extent and character of domestic abuse. This essay will firstly examine the gendered conceptualisation of domestic violence as contributed by the feminist movement and how this has impacted on our understanding of victimisation, followed by a brief examination of recent legislative changes and the support services available for women as victims. Next, we offer a discussion that looks at the ways in which female victimisation has become dominant and male victimisation is trivialised. We will emphasize some of the research that challenges the dominant feminist view of female victimisation and the controversy that surrounds it. Then we continue with an examination of the provision of support for male victims. Finally, we highlight the methodology used by the different researchers in order to shed some light on the debate. During the 1970's and 1980's feminist scholars were determined to expose the extent to which women were victimised in the home. ...read more.

points out that historical images of the victim, such as Von Hentig's suggestion of a blameworthy victim, is an ideological reflection embedded in a male orientated view of victimisation. The feminist paradigm appears to be constrained in a similar ideological straitjacket in that it views male violence as never justified and female violence as always justified. In addition, it is not clear how men are to be held accountable for violence if patriarchy is to blame (Dutton & Nicholls, 2005, p.682). Therefore, for certain commentators the feminist view of domestic violence is indicative of a dominant hegemony of matriarchy. (Strauss & Gelles, 1986; Strauss, 1993; Dutton & Nicholls, 2005) In contrast, the family conflict paradigm presents an alternative perspective to feminism and is related to the work of Strauss and Gelles (1986) who promoted efforts to quantify the prevalence of family violence. They developed a Conflict Tactic Scale (CTS) as a quantitative measure of the controlling and abusive tactics couples will sometimes use against each other. Using this scale they uncovered similar levels of partner violence perpetrated by both males and females. According to Strauss and Gelles (1986, p.470) "women are about as violent within the family as men". They concluded that their data indicates that women engage in minor assaults against their male partners at a slightly higher rate than their male counterparts. This seems to run counter to public and academic perceptions that assume victims of domestic abuse are disproportionately female. Thus the claim that both male and females are victimised equally deserves some further qualification. Consequently, we will critically examine some of the findings from recent crime surveys. The use of the self-completion questionnaires in the 1996 British Crime Survey (BCS) revealed considerably higher rates of domestic abuse than previous surveys. The survey reveals that of respondent's aged 16-59 4.2 percent of women and 4.2 percent of men reported they had been physically assaulted from a current or former partner (Mirrlees-Black & Byron, 1999, p.1). ...read more.

In other words different populations and different levels of measure will produce different results. Johnson concludes that the different researchers are probably analysing different phenomena (Johnson, 1995. p.284). A greater understanding of the impact of victimisation in the previously 'hidden' sphere of domestic violence has led to an increased awareness of the plight of women who are abused. Feminism has highlighted that domestic violence is a gendered phenomenon based in male coercion and control. The feminist paradigm has successfully highlighted that domestic violence is not just an individual problem, but a social and political one (Dobash & Dobash, 2000). Furthermore, feminism has had a substantial impact on policy developments both at a state level and in terms of the voluntary sector. Support services for women victims of domestic violence continue to receive government and private funding. There are scholars, however, who argue that there exists a conflicting 'hidden' view of domestic abuse. Studies that have examined the bidirectional dynamics of family violence have indicated that men may not be the sole patriarchal perpetrators as previously thought. Males also suffer violence and domestic abuse which is reciprocal in nature. Yet feminists, governments, services and society appear to be reluctant admit that females maybe equal perpetrators. This means that services that provide support for male victims are seriously lacking in funding and governmental acknowledgement. There may be several reasons for this. Firstly, support services and intervention programs were primarily initiated by the women's movement. Secondly, women as victims are much more likely to be physically, psychologically and economically injured. Nonetheless, the evidence suggests that violence perpetrated by women against men does occur. This has created deepening debate and controversy around these issues. Finally, it not the intention of this essay to undermined feminist contributions to the understanding of domestic violence as they have clearly contributed the most to support, interventions and fundamental changes in society. Yet, in order to deepen our understanding of victim's needs and the appropriate interventions we need to embrace all insights into violence and not dismiss them because they do not fit our particular ideological lens. ...read more.