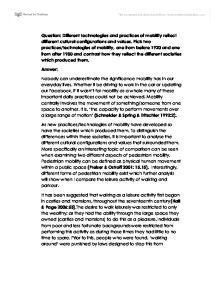 Walking and Parkour, it is evident that while walking as a leisure activity and parkour have some similarities, they are both regarded quite differently in the societies that produced them

Question: Different technologies and practices of mobility reflect different cultural configurations and values. Pick two practices/technologies of mobility, one from before 1920 and one from after 1980 and contrast how they reflect the different societies which produced them. Answer: Nobody can underestimate the significance mobility has in our everyday lives. Whether it be driving to work in the car or updating our Facebook, if it wasn't for mobility as a whole many of these important daily practices could not be achieved. Mobility centrally involves the movement of something/someone from one space to another. It is, 'the capacity to perform movements over a large range of motion' (Schneider & Spring & Tritschler 1992:2). As new practices/technologies of mobility have developed so have the societies which produced them. To distinguish the differences within these societies, it is important to analyse the different cultural configurations and values that surrounded them. More specifically an interesting topic of comparison can be seen when examining two different aspects of pedestrian mobility. Pedestrian mobility can be defined as physical human movement within a public space (Preiser & Ostroff 2001: 15.15). Interestingly, different forms of pedestrian mobility exist which further analysis will show when I compare the leisure activity of walking and parkour. It has been suggested that walking as a leisure activity first began in castles and mansions, throughout the seventeenth century (Hall & Page 2006:53).The desire to walk leisurely was restricted to only the wealthy; as they had the ability through the large space they owned (castles and mansions) ...read more.

Walking leisurely in rural areas was a little different than that of city areas where infrastructure was much more developed. In many of these rural areas, roads could not be built through a lack of infrastructure, as these areas were quite distant to the main cities. Compared to parkour, societies who lived in these rural areas had little control over their movement. Rather than challenging the space, those living in rural areas were confined to a specific space and routine. Let us not forget that prior to the introduction of walking trails in rural communities, those living within them would find it hard to explore these spaces around them as individuals would get lost very easily because there was no way of creating a 'sense of place' . Walking trails/paths provided individuals in rural areas the availability of places to walk leisurely in. (Brownson etc 2000:1). It helped release the isolation that previously existed and even though rural areas were still confined to a certain space as geographically they were away from main cities, this increased interaction helped reconfigure social and other relations. Finally people living in rural areas could also feel safe when walking leisurely as structures were now in place that helped provide a sense of location. On the other hand, those who practice parkour, live in a society where different sub-cultures exists who pride themselves on exceeding human boundaries as television shows such as 'Jackass' suggest. ...read more.