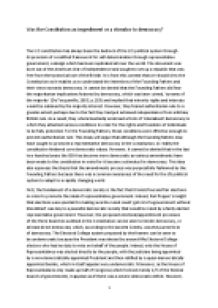 Was the U.S. Constitution an impediment or a stimulus to democracy?

﻿Was the Constitution an impediment or a stimulus to democracy? The U.S constitution has always been the bedrock of the U.S political system through its provision of a codified framework for self-determination through representative government; a design which has been replicated all over the world. The document was born out of the American War of Independence and sought to set up a republic that was free from the tyrannical rule of the British. It is from this context that we should view the Constitution as it enables us to understand the intentions of the Founding Fathers and their views towards democracy. It cannot be denied that the Founding Fathers did fear the majoritarian implications fostered by democracy, which was later coined, ?tyranny of the majority? (De Tocqueville, 1863, p.183) and implied that minority rights and interests would be subdued by the majority interest. However, they feared authoritarian rule to a greater extent perhaps due to the fact they had just achieved independence from arbitrary British rule. As a result, they whole heartedly endorsed a form of ?Liberalised? democracy to which they attached various conditions in order for the rights and freedoms of individuals to be fully protected. For the Founding Fathers, these conditions were effective enough to prevent authoritarian rule. This essay will argue that although the founding fathers may have sought to promote a representative democracy in the constitution, in reality the constitution hindered core democratic values. ...read more.

Further, the Bill of Rights has become the most celebrated part of the Constitution as it is primarily concerned with the protection of individual rights and freedoms and therefore can be seen as a stimulus to democracy. For example, the First Amendment states that ?Congress shall make no law respecting an establishment of religion, or prohibiting the free exercise thereof freedom of speech, or of the press; or the right of the people peaceably to assemble.?(Jefferson, 2007, p.412) The notion of free speech has become the fundament of a democratic society and many free-speech advocates have argued that democracy requires the notion of free speech. For example, Meiklejohn argued that for democracy to be ?true? the electorate must be informed which cannot occur without freedom of speech. (Meikeljohn, 2004) However, although the Constitution appears a stimulus to democracy through its protection of individual rights, only in the last half a century have the rights of all citizens been honored which can be said to be undemocratic. For example, during the 19th and early 20th century, neither women nor blacks had the right to vote as they were deemed ?inferior? to white men. Indeed, if democracy does seek to promote self-government, it seems inherently undemocratic that women and blacks did not receive the vote. However, this argument can be qualified by the fact that female suffrage, through the 19th amendment in 1920, and the black vote, through the 15th amendment, was introduced and exemplifies how the USA has modified the constitution through the years in order for it to become a more effective stimulus of democracy. ...read more.

the Constitution and in addition to the constantly changing meaning of the rhetoric over the last two centuries, the constitution can be interpreted in many ways which therefore arms nine unelected justices with a huge amount of power. This is not just a fervent centralisation of power, but is inherently undemocratic. However, this argument can be qualified by the notion of ?judicial self-restraint,? which although may be described as ?political common sense? (McKay, 2009, p. 346) rather than anything justifiable on philosophical grounds, it has proved effective in the fact that judicial review is barely inflicted which has thus allowed the Judiciary to act as a check and balancer and therefore become a stimulus to democracy rather than an arbitrary institution. In sum, although the original Constitution is an impediment to democracy, especially to direct democracy, the nature of the context of which it was born is vital to understanding that the framers? intention was to construct a new republic based on representative, and not direct democracy. However, it is also clear that they did fear arbitrary rule through too much representation and as a result they outlined a number conditions in the Constitution to protect individual rights. Indeed, there is a general consensus among political scientists that the Constitution is outdated, however, it seems to me that its strength is that it has developed over time and has been amended in order that it can stimulate democracy, especially in the 20th century with the rise of the Liberal democratic nation-state. ...read more.