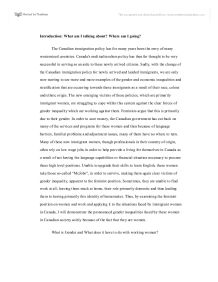 What am I talking about? Where am I going? - The Canadian immigration policy has for many years been the envy of many westernized countries.

Introduction: What am I talking about? Where am I going? The Canadian immigration policy has for many years been the envy of many westernized countries. Canada's multiculturalism policy has thus far thought to be very successful in serving as an aide to these newly arrived citizens. Sadly, with the change of the Canadian immigration policy for newly arrived and landed immigrants, we are only now starting to see more and more examples of the gender and economic inequalities and stratification that are occurring towards these immigrants as a result of their race, colour and ethnic origin. The new emerging victims of these policies, which are primarily immigrant women, are struggling to cope within this system against the clear forces of gender inequality which are working against them. Feminists argue that this is primarily due to their gender. In order to save money, the Canadian government has cut back on many of the services and programs for these women and then because of language barriers, familial problems and adjustment issues, many of them have no where to turn. Many of these new immigrant women, though professionals in their country of origin, often rely on low wage jobs in order to help provide a living for themselves in Canada as a result of not having the language capabilities or financial situation necessary to procure these high level positions. ...read more.

This trend was also apparent in the 1980s in Canada. Today, the employer's preference for hiring men, finding suitable work hours and lack of support from family members often force these women to either not participate in the labour market or to gain employment in low-paying jobs, putting these women often in a lower class. Even when immigrant women find employment with suitable work hours for them, many women report that "...their husbands and children were shocked by the loss of status and authority that they[the immigrant women] experienced when they took poorly paid service jobs..."(Man and Preston, 2002:8). The conflicting and changing gender roles of these women also contribute to the gender inequalities present in Canadian society. The fact that many new immigrant women depended on family members and paid servants to take care of their families and housework in their home country, while they worked, leads many women now to assume the "...unfamiliar roles of homemaker, employee, wife and mother."(Man and Preston, 2002:8). Isolated from family members and unable to afford domestic help, these women struggle to accommodate the changes of paid work and domestic responsibilities all on their own without the help of their partner, solely because it is "their responsibility because they are women"(Man and Preston, 2002:8). ...read more.

Not having the necessary language skills, these women are often forced to take jobs in the low paying service sector. Through presenting many examples above of this marginalization, I have attempted to show that this is indeed happening at an alarming rate in Canada and that policy changes need to occur soon if there is to be any hope for these women. Conclusion: What did I leave out? In general it can be said in Canada that immigrants are a marginalized group. In my paper though, I focused primarily on the immigrant woman as she by studies completed, tends to be marginalized more so than her male counterpart. Also on this topic, could be applied the concepts of race and colour, as many minority women reported that this is also a factor in attaining employment (Man and Preston, 2002: 22). Sadly, the lack of time and space meant that I had to generalize and take these women and write on them as a group. Also to this topic could be applied the marginalization of the immigrant woman who has been here for many years, compared to the newly arrived immigrant woman. Though studies have been completed in this area, much more can and should be done as the blatant inequalities occurring towards these women is not disappearing and it is not something which should remain hidden. ...read more.