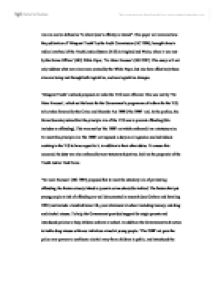 What are the aims of the Youth Justice System in England and Wales. How did they come about and how effectively are they being met? Discuss

An aim can be defined as "to direct (one's efforts); to intend". This paper will examine how the publication of 'Misspent Youth' by the Audit Commission (AC 1996), brought about a radical overhaul of the Youth Justice System (YJS) in England and Wales, when it was met by the Home Offices' (HO) White Paper, 'No More Excuses' (HO 1997). This essay will not only address what new aims were created by the White Paper, but also how effectively these aims are being met through both legislative, and non-legislative changes. 'Misspent Youth' outlined proposals to make the YJS more efficient. This was met by 'No More Excuses', which set the basis for the Government's programme of reform for the YJS, to be taken forward by the Crime and Disorder Act 1998 ('the 1998' act). In the preface, the Home Secretary stated that the principle aim of the YJS was to prevent offending (this includes re-offending). This was met by 'the 1998' act which enforced it as a statutory aim. To meet this principle aim 'the 1998' act imposed a duty on all agencies and individuals working in the YJS to have regard to it, in addition to their other duties. To ensure this occurred, the duty was also enforced by non-statutory objectives, built on the proposals of the Youth Justice Task Force. 'No more Excuses' (HO 1997) proposed that to meet the statutory aim of preventing offending, the factors closely linked to juvenile crime should be tackled. The factors that put young people at risk of offending are well documented in research (see Graham and Bowling 1995) ...read more.

This undermines the credibility of the order in view of the court, the YO and his or her parent. The White Paper (HO 1997) also aims to provide effective custodial sentences and remands. This aim was met by 'the 1999' act which allowed court-ordered remands direct to local authority secure accommodation for certain groups of YO, such as vulnerable 15 and 16-year-old boys. This was coupled with Regime standards developed by the Prison Service to safeguard the welfare of the YO, consistent with the need to protect public and staff whilst remanded in custody. Unnecessary secure remands try to be avoided, and from March 2000 to September 2003, the juvenile remand population went from 722 to 620. However the average time spent on remand during this period has not reduced overall (AC 2004, pg.21-22) and limited spare capacity resulted in 2,400 moves between April 2002 and January 2003 with more vulnerable boys being placed in YO institutions (NAO 2004). The provision of bail supervision and support also appears effective in reducing delays due to non-appearance and cut costs by providing YO with opportunities to tackle offending behaviour. However, although the AC (2004, pg 21) found "the number of young people who offend on bail has fallen from one in three to one in five", it was suggested that devoting resources to bail support programmes in itself is not sufficient to reduce the number of secure remands. Furthermore, there was also evidence that remand decisions leading to custody altered for different ethnic groups. To reduce the number of YO in custody 'the 1998' act also introduced the Detention and Training Order (DTO), which attempt to prevent further crime by halving the sentence spent in custody, with the remainder spent under community supervision. ...read more.

(HO 2001). However, the AC (2004) discovered that some courts have not had the resources to make changes to their formal layout, and improvements still need to be made regarding interaction. For example, 61% of magistrates said they had at least some difficulty getting young defendants to engage in discussion, which can influence how the court perceives the defendant. This is especially problematic considering that 80% of magistrates surveyed said that attitude and demeanour influences their sentencing decision. In conclusion, the radical overhaul of the YJS has led to a number of aims, all of which have to adhere to the principle aim of preventing offending. Overall, it appears these aims are effectively being met. YO are now more likely to receive an intervention when they first offend, and the time taken from arrest to sentence has dramatically reduced. In addition, prevention schemes appear effective and adequately funded, and many of the new alternatives to custodial sentences, most notably ISSP's, are making a positive impact. Most importantly, the YJB sets a clear national framework and Yots seem to successfully co-ordinate and deliver services to YO and the courts. Whilst more could be done to help reform the youth courts, the changes so far appear effective. In regards to custodial sentences, it appears that although DTO's can be effective, the programmes required to help YO are often not provided and the transition back into the community is not as good as it could be. Furthermore large numbers of YO are still being remanded into custody and the aim of increasing public awareness and confidence in the YJS is not being met. It also appears that the discrepancies regarding both gender and ethnicity need to be addressed by the YJS. ...read more.