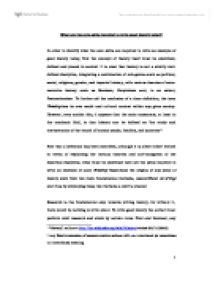 What are the core skills required to write good history today

What are the core skills required to write good history today? In order to identify what the core skills are required to write an example of good history today, first the concept of history itself must be examined, defined and placed in context. It is clear that history is not a strictly well-defined discipline, integrating a combination of sub-genres such as political, social, religious, gender, and imperial history, with various theories of meta-narrative history such as Marxism, Empiricism and, to an extent, Postmodernism. To further aid the confusion of a clear definition, the term history has its own social and cultural context within any given society. However, even amidst this, it appears that the main consensus, at least in the academic field, is that history can be defined as 'the study and interpretation of the record of human people, families, and societies'1. Now that a definition has been identified, although it is albeit rather limited in terms of explaining the various theories and sub-categories of the historical discipline, what must be examined next are the skills required to write an example of such history. ...read more.

Sources are, in the postmodern viewpoint, 'never taken at their word...but critically interrogated'10. Paradoxically, some postmodernists would even go as far as saying that perhaps secondary sources are more useful than primary, due to the fact that secondary sources are 'the product of the historian's cogitation and skill...[and are] in the cultural sense far more important'11. Furthermore, postmodernists point to the ambiguity of language and its meaning throughout the centuries, and the fact that the majority of primary sources are in fact copies of copies, where there have been countless opportunities for error to occur. These considerations therefore 'undermine any confidence that the texts...can be validated'12 by empiricist methodologies or philosophies. Once adequate research has been undertaken on the topic of choice, and the sources have been collected, analysed, and interpreted, the historian must being the latter of the two fundamental principles of writing history, physically documenting the narrative, or writing it. When writing history, there appears to be one factor that marks a difference between what can be label 'good' and 'bad' history - communication. So, not only must a historian research and collect sources that are relevant to the topic at hand (and by doing so going through all the processes aforementioned), they must also be able to, as Arthur Marwick proposed, communicate in 'clear and precise language'13. ...read more.

Instead however it disagrees with empiricist philosophies of historical knowledge. For modern works (modern in the sense of being written within the last 20 years) to be classified as postmodern, they must recognise that it is impossible to depict reality in an objective way in any text (due to a variety of factors, including language, discourse, and representation), so therefore texts instead depict re-presentations of reality based on the social discourses at the time. Furthermore the author must accept the inherent power based within the structures of society, be it political, social or cultural, and the power of language and, perhaps strangest of all, how all historical texts are incapable of attaining originality because the discourses surrounding them must have already existed. In conclusion therefore, the core skills require to write good history can be dissected into three main parts; the two fundamental principles of research and writing, within each incorporating their own inherent rules and concepts to adhere to; and the notion of social acceptance (via the audience's readings and obedience to history's current dominant hegemony) for a text to become a 'good' piece of history which, in this case, is the adherence to empiricist method and postmodernist philosophy. ...read more.