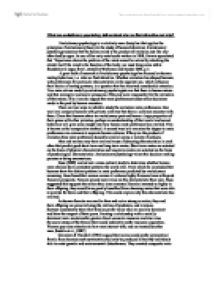 What can evolutionary psychology tell us about who we find attractive and why?

What can evolutionary psychology tell us about who we find attractive and why? Evolutionary psychology is a relatively new discipline that applies the principles of evolutionary theory to the study of human behaviour. Evolutionary psychology assumes that the human mind is the product of evolution just like any other bodily organ. In one of his early note books written in 1838, Darwin speculated that 'Experience shows the problem of the mind cannot be solved by attacking the citadel itself, the mind is the function of the body, we must bring some stable foundation to argue from', stated by Workman and Reader 2004, p.7. A great bulk of research in Evolutionary psychology has focused on human mating behaviour, i.e. who we find attractive. Whether evolution has shaped humans with preferences for particular characteristics in the opposite sex, which influence their choice of mating partners, is a question that has received considerable attention. Two main claims made by evolutionary psychologists are that there is human nature and that ecological and social pressures of the past were responsible for the evolution of that nature. If so it can be argued that mate preferences today reflect decisions made in the past by human ancestors. There are two ways in which to study the evolution mate preferences. One way is to compare humans with primate relatives that share a common ancestor with them. Given that humans share an evolutionary past and hence a large proportion of their genes with other primates, perhaps an understanding of their social and sexual behaviour will give some insight into how human mate preference has evolved. ...read more.

and ancestral males would have been able to detect and respond accordingly to these signals. Such signals would be reflection of developmental and hormonal health. In all studies of mate preferences a typical and strong finding is that males prefer females who are at their peak of reproductive potential. Buss found that men typically placed more value than women on the physical attractiveness of their partner. Universally men prefer large eyes, good teeth, lustrous hair, full lips, smooth skin and a low hip to waist ratio. These physical traits are generally associated with youthfulness. 'To be reproductively successful, ancestral men had to marry women with the capacity to bear children' (Buss, 1999, p.133.). As males age, they prefer mates who are increasingly younger (Kenrick & Keefe, 1992). Women are only fertile from their mid teens to their late forty's which is why youthfulness is associated with fertility and therefore can explain men's preference for such characteristics. Of course, the preference for younger partners is not always to be predicted, if teenage males preferred younger partners then these females may not be old enough to bear children, it would therefore be predicted that teenage males would prefer slightly older females. Kenrick et al., (1996) asked teenage males and females (aged between 12-19) the ideal age of a dating partner, and the age limits that would be acceptable. Teenage males (unlike older males) preferred mates who were slightly older than themselves. This relationship is not the same in reverse since men have a lengthy period of fertility. ...read more.

Importance of certain preferences varies between cultures. Specific cultural variables need to be looked at more closely to understand why they differ so much. Developmental flexibility allows humans to adjust to social and economic circumstances within society. Gangestad & Simpson (2000) suggest that women's decision to seek short or long term mates may depend on environmental circumstances at the time they mate. If the child is going to be born into a world dominated by death and disease it would make sense to mate with a man rich in good genes. On the other hand, if a woman is in an environment where she has difficulty obtaining resources she should favour mating with men of high status and power who exhibit good parenting skills. References Buss, D. M. et al. (1989). International preferences in selecting mates, a study of 37 cultures. Journal of Cross-Cultural Psychology 21, 5-47. Buss, D. M. (1999). Evolutionary Psychology, The New Science of the mind. Boston: Allyn and Bacon. Gangestad, S. W. & Simpson, J. A. (2000) The Evolution of Human Mating: Trade-Offs and Strategic Pluralism, Behavioural and Brain Sciences 23 Grammer, K., & Thornhill, R. (1994). Human facial attractiveness and sexual Selection, the role of symmetry and averageness. Journal of Comparative Psychology 108, 233-242. Kenrick, D. T. & Keefe, R.C. (1992) Age preferences in mates reflects sex differences in reproductive strategies. Behavioural and Brain Sciences 15, 75-133. Kenrick, D.T., Keefe, R.C., Gabrielidis, C., & Cornelius, J.S. (1996). Adolescents' age preferences for dating partners: support for an evolutionary model of life history strategies. Child Development, 67, 1499-1511. La Cerra, M.M. (1994). ...read more.