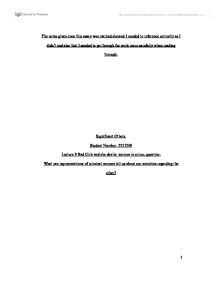 What can representations of criminal women tell us about our anxieties regarding the other?

The notes given once this essay was marked showed I needed to reference correctly as I didn't and also that I needed to go through the work more carefully when reading through. Significant Others. Student Number: 2521269 Lecture 8 Bad Girls and she devils: women in crime, question: What can representations of criminal women tell us about our anxieties regarding the other? Contents. 1. Front Page 2. Contents 3. Introduction, Case study, One: Myra Hindley 4. case study one: media responses 5. case study one: Anxieties and their effects 6. case study two: Rosemary West 7. Case study two: Media and Discourses 8. Case study two: Film and Documentary reactions to similar cases. 9. Aileen Wuornos: The life and death of a serial killer - Monster 10. TV Series Bad girls and our changing discourses on female behaviour. 11. Conclusion 12. Bibliography + Filmography Introduction The representations of women in crime have long been known to be different to those of men. Woman who commit murder or adultery, are presented as more evil or guilty than their male counterparts. Through the media and films such as, bad girls, monster, etc, we see how the publics view on female criminals is "manipulated". ...read more.

The media also character analysed West, showing her deficiencies as a mother and a domestic wife which damaged her case and her respectability in the eyes of the jury. "The ideologies around motherhood, domesticity, respectability and conduct discussed above in relation to all women, play a powerful role in the way criminal women are treated." (2. Page 51) We know that when a woman breaks the common discourse of female behaviour, it is met with disgust and hostility. However we see a very interesting and diverse reaction to the way woman criminals are represented in films and TV. There was very little shown about Rosemary West, however the serial killer Aileen Wuornos had a lot of media attention. Nick Broomfield brought out his second documentary on Aileen Wuornos "The Life and Death of a Serial Killer" in November 2003. Just before this, Patty Jenkins released in April 2003 "Monster"; a film based on the true life events and tragedies of Aileen Wuornos. A brilliant casting and performance from Charlize Theron, brought together Patty Jenkins's powerful writing. This challenged the pre-conceived discourses about female behaviour and how the public reacts to crimes by women that would normally breed hate and anxiety. ...read more.

Conclusion Our anxieties have made a vast impression upon the justice system, and have also resulted in the horrific treatment of accused female murderers. In the case of Aileen Wuornos, her treatment over her entire life by her own family and friends prevented her from learning and accepting the behavioral discourses that we accept. Criminal women tell us a lot about our anxieties about the other, theorists and the media pick up upon these discourses and anxieties. The media use our anxieties of the deviant to sell papers but as we have seen. this has adverse effects on an impartial justice system. Overall I believe that women are treated extremely different to men when convicted of crimes. If a man commits murder it is less frowned upon than a woman committing murder. This is because of many reasons I have discussed but the fact remains because of our inability to treat men and women EQUALLY, they will always have disproportionate punishments to each other. Recent popular media and films like the ones discussed above have marked a positive change in equality between men and woman when going through the justice system. As the rights of women become more and more equal so will hopefully the discourses on their behaviour. ...read more.