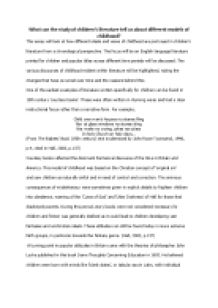 What can the study of childrens literature tell us about different models of childhood?

﻿What can the study of children?s literature tell us about different models of childhood? This essay will look at how different ideals and views of childhood are portrayed in children?s literature from a chronological perspective. The focus will be on English language literature printed for children and popular titles across different time periods will be discussed. The various discourses of childhood evident within literature will be highlighted, noting the changes that have occurred over time and the reasons behind this. One of the earliest examples of literature written specifically for children can be found in 15th century ?courtesy books?. These were often written in rhyming verse and had a clear instructional focus rather than a narrative form. For example, Child over men?s houses no stones fling Nor at glass windows no stones sling Nor make no crying, jokes nor plays In holy Church on holy days... (From The Babees? Book (15th century) text modernised by John Rowe Townsend, 1990, p.4, cited in Hall, 2003, p.137) Courtesy books reflected the dominant Puritanical discourse of the time in Britain and America. This model of childhood was based on the Christian concept of ?original sin? and saw children as naturally sinful and in need of control and correction. The ominous consequences of misbehaviour were sometimes given in explicit details to frighten children into obedience, warning of the ?Curse of God? and ?Utter Darkness? of Hell for those that disobeyed parents. ...read more.

of the time, including Blake, Wordsworth and Kingsley, whose writings promoted the romantic ideal and helped to change popular public opinion, bringing children and childhood to the forefront of social debate and consciousness . The idealistic romantic concepts of childhood strongly affected the middle classes, who were shocked by the plight of child labourers in England whose struggles became apparent during this time period. The harsh reality for the majority of working-class children in England was a short-lived childhood, limited educational opportunities and manual labour from a young age. The struggle to reduce child labour and increase educational options was complex and protracted process, spanning the 19th and 20th century, and can be traced in children?s literature of the time. Charles Kingsley?s The Water Babies (1863) presented the shocking and unfair contrast between real working class childhoods and the Romantic ideal through the story of orphaned chimney sweep Tom. Tom suffers cruel treatment and harsh working conditions all without the love or care of a family. Hope comes when Tom is transformed into a water baby and finally gets the shelter and affection he needs from the magical Mrs. Doasyouwouldbedoneby. Books such as The Water Babies clearly highlighted the need for social reform in the lives and childhoods of such children and gradually the romantic discourse gained popularity and momentum during the end of 19th century which continued into the 20th century. ...read more.

In conclusion children?s literature is a good reflection of popular attitudes towards childhood at the time of print. As new theories and ideas about childhood emerged, children?s literature also changed to accommodate and promote these ideals. Notably, all literature conveys a message or moral undertone, weather subtle or direct. The earliest books for children reflected the puritanical model of childhood dominant in the 17th century. A significant change can be seen in the 18th century books of John Newbery who was influenced by the concept of childhood as a ?blank slate?, as theorised by John Locke. His books promoted a kind and loving upbringing for children who were nurtured through enjoyment and encouragement. The mid-18th century Romantic Movement had a highly significant impact and Romantic ideals of a pure and innocent childhood, free from dangers and harsh realities of life have been traceable in children?s literature since the 18th century and are still dominant today. Contemporary literature has attempted to promote equality and tolerance in childhood and has also pushed the boundaries of traditional fiction. Like the social reformers of the 18th and 19th century, modern writers such as Melvin Burgess have shown how children?s literature plays an important part not only in portraying and promoting ideals, but also in questioning and debating social attitudes and ideas about children and childhood. ...read more.