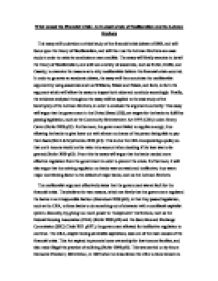 What caused the Financial Crisis: An in-depth study of Neoliberalism and the Lehman Brothers

What caused the Financial Crisis: An in-depth study of Neoliberalism and the Lehman Brothers This essay will undertake a critical study of the financial crisis debate of 2008, and will focus upon the theory of Neoliberalism, and will then use the Lehman Brothers as a case study in order to make its conclusions more credible. The essay will firstly examine in detail the theory of Neoliberalism, and will use a variety of academics, such as Butler, Duffie, and Cassidy, to examine the reasons as to why neoliberalists believe the financial crisis occurred. In order to generate an academic debate, the essay will then scrutinize the neoliberalist argument by using academics such as Williams, Pelaez and Pelaez, and Kotz, to form the argument which will allow the essay to inspect both sides and conclude accordingly. Finally, the evidence analysed throughout the essay will be applied to the case study of the bankruptcy of the Lehman Brothers, in order to evaluate the arguments correctly. This essay will argue that the government in the United Stated (US), set targets for the banks to fulfil by passing legislation, such as the Community Reinvestment Act 1977 (CRA) under Jimmy Carter (Butler 2009 p53). Furthermore, the government failed to regulate enough, thus allowing the banks to give loans out with almost no chance of the person being able to pay them back (Birch & Mykhnenko 2010 p14). This is due the CRA incorporating a policy so that one's income would not be taken into account when deciding if the loan was to be granted (Butler 2009 p53). From this the essay will argue that the banks needed more effective regulation from the government in order to prevent the crisis. Furthermore, it will also argue that the existing regulation on banks was too weak and ineffective, thus was a major contributing factor to the default of major banks, such as the Lehman Brothers. ...read more.

The public interest view first came about in Adam Smith's "wealth of nations", in which he proposed that individuals that seek their self interest promote the public good, thus legitimising government interventionism (Pelaez & Pelaez 2009 p5). Government intervention was an apparent consequence of the financial crisis in 2008 (Sheehan 2011 p135), in which the British government nationalised Northern Rock in order to save it (Augar 2011 p94), whilst the Federal Reserve in the US bailed out Freddie Mac and Fannie Mae (Butler 2009 p55). Booth supports the public interest view, by stating that the financial crisis of 2008 is comparable to the Wall Street Crash of 1929 and the Great Depression that followed, in that they were both caused due to the fact the government did not keep a tighter rein on finance (Booth 2009 p157). Moreover, Singer continues this argument by stating that due to the crisis, substantial debate has arose in which many leading economists are calling for governance of the markets (Singer 2010 p93). The public interest view is thus a major critique of the neoliberalist theory, in that they did not blame the government for too much regulation, and they effectively state the government should have taken control using the aforementioned methods in order to stem the impact of the global financial crisis. Secondly, the private interest view provides a further critique of neoliberlist theory, as this view states the possibility of government failure, and suggests that one could restrict collective action to improve social welfare (Pelaez and Pelaez 2009 p18). In other words, the private interest view raises doubts about the effectiveness of regulation, due to the power of the banks (Pelaez and Pelaez 2009 p18). This view is supported by Myddelton, as he states that the main cause of the financial crisis was defective regulation by governments (Myddelton 2009 p101). Furthermore, this view can also be seen as defective consumer protection procedures, rather than defective regulation. ...read more.

Additionally, further evidence of deregulation can be witnessed in the south regulatory processes that the Lehman Brothers used in order to make themselves richer and not necessarily more financially secure. The CDS market, which the Lehman Brothers were major actors in, is a major example of this and was contributing factor to the Lehman Brothers downfall (Williams 2010 p100). To summarise, it is evident that the public and private interest views, as well as that of deregulation, and even the neoliberalist anti-legislation argument, all have merit and thus proves, as expected, there were various reasons as to why the Lehman Brothers defaulted. Conclusively, this essay has examined both the neoliberalist viewpoint and the critiques of neoliberalism in the examination of the causes of the financial crisis. By studying the Lehman Brothers in particular, it has enabled this essay to come to two major conclusions. Firstly, this essay has proven that deregulation should never have occurred, and the government should not have passed damaging legislation, such as the CRA, which forced the banks into this state. This is strongly linked to the second conclusion, in that the essay suggests that to prevent further financial calamities, strong regulation must be placed on the financial markets so that any financial crisis will be blamed on the government, and will not force the markets to be reliant on the economic recklessness of the bankers, whilst also preventing any further nationalisation and government intervention from needing to occur. Academics have now called for a restructuring of the capitalist system (Kotz 2009 p316, Kaletsky 2010 p54), and thus the proposed regulatory changes would allow a smooth operating restructured financial system, and will continue to make privatisation necessary in order to ensure that the government does not run the financial system, but instead just regulates it to a degree that no repeat of the financial crisis of 2008 will be able to happen again. ...read more.