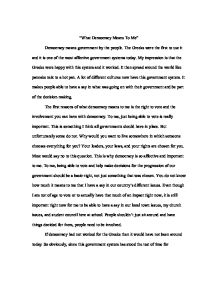 What Democracy Means To Me

"What Democracy Means To Me" Democracy means government by the people. The Greeks were the first to use it and it is one of the most affective government systems today. My impression is that the Greeks were happy with this system and it worked. It then spread around the world like pancake mix to a hot pan. A lot of different cultures now have this government system. It makes people able to have a say in what was going on with their government and be part of the decision-making. The first reasons of what democracy means to me is the right to vote and the involvement you can have with democracy. ...read more.

Even though I am not of age to vote or to actually have that much of an impact right now, it is still important right now for me to be able to have a say in our local town issues, my church issues, and student council here at school. People shouldn't just sit around and have things decided for them, people need to be involved. If democracy had not worked for the Greeks then it would have not been around today. So obviously, since this government system has stood the test of time for thousands of years, it must work. The country today most widely known for a democracy is the United States of America. ...read more.

that country jealous of us because we have worked a shorter time then they have and have gotten further then they have. It's not our fault; they could have and still could switch to democracy. The democracy government was first used by the Greeks and is still used today and probably will be used in the future. For me, democracy is the freedom to speak up and get involved. If this government system were not present for people in life, it would be like taking away basic human rights. You should decide what you want, not have someone else decide for you. Democracy means government by the people and that is what I truly believe. All this is what democracy means to me. ...read more.