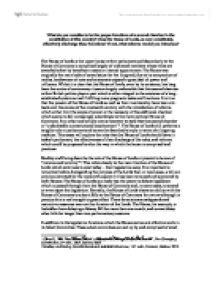 What do you consider to be the proper functions of a second chamber in the constitution of this country? Does the House of Lords, as now constituted, effectively discharge these functions? If not, what reforms would you introduce?

What do you consider to be the proper functions of a second chamber in the constitution of this country? Does the House of Lords, as now constituted, effectively discharge these functions? If not, what reforms would you introduce? The House of Lords is the upper house within parliament and dissimilarly to the House of Commons is comprised largely of unelected members whose titles are awarded either by hereditary means or internal appointment. The House was originally the main body of consultation for the king and, due to its composition of nobles, landowners of note and aristocrats enjoyed a great deal of power and influence. Whilst it is clear that the House of Lords, even by its existence, has long been the centre of controversy it seems largely undeniable that this second chamber within British politics plays a part which is often integral to the existence of a long-established system as well fulfilling more pragmatic tasks and functions. It is true that the powers of the House of Lords as well as their membership have been cut-back over the course of the nineteenth century with the introduction of reforms which either limit the scope of power or the necessity of the additional chamber which seems to fall increasingly subordinate to the more political House of Commons. ...read more.

Whilst the Salisbury convention was reviewed in 2006 in order to 'seek consensus on the conventions applicable', it was decided that the convention had altered since its original conception and that now every manifesto was subject to a second reading by the Lords, it was recognized also that any House of Lords resolution to set out the convention's terms would be 'unenforceable'6. It is clear from these restrictions that the House of Lords is relatively restricted in the ways in which they are able to discharge their functions effectively - Shell even states that "the second chamber should be cautious about challenging the...views of the House of Commons on any policy issue"7. Parliamentary reforms have also largely impeded on the powers of the Lords in another way over the course of the previous decade. One of the main functions of the House of Lords was once as the highest court of appeal in the land. Historically the House of Lords formed a court and had an extremely large part to play in the judicial nature of the United Kingdom. These powers, however, were finally brought to a close by Part 3 of the Constitutional Reform Act8. This reform aimed at the separation of the powers of Lord Chancellor which extended across ruling bodies and played a key role in the recommendation of judges to the Queen. ...read more.