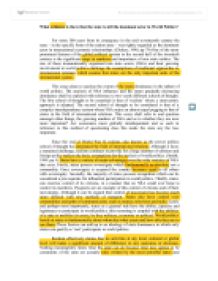 What evidence is there that the state is still the dominant actor in World Politics?

What evidence is there that the state is still the dominant actor in World Politics? For some 300 years from its emergence in the mid seventeenth century the state - in the specific form of the nation state - was rightly regarded as the dominant actor in international economic relationships. (Dicken; 1998, pp 79) One of the most prominent features of the global political system in the second half of the twentieth century is the significant surge in numbers and importance of non state entities. The rise of these transnationally organised non state actors (NSA) and their growing involvement in world politics challenge the assumptions of traditional approaches to international relations which assume that states are the only important units of the international system. This essay plans to analyse the extent of the states dominance in the sphere of world politics. The analysis of NSA influence and the states gradually decreasing dominance shall be explored with reference to two vastly different schools of thought. The first school of thought to be examined is that of 'realism' where a state-centric approach is adopted. The second school of thought to be considered is that of a complex interdependence system where NSA enjoy an almost equal pegging to that of states in the field of international relations. ...read more.

proliferated in number far beyond anything remotely existing in the past; (b) individually grew in size far beyond anything existing in the past; (c) performed functions which they had never previously performed; and (d) operated on a truly global scale such as was never possible in the past. (Little and Smith; 1998,pp213) The state is not necessarily the only important actor in world politics nor the 'gatekeeper between intra-societal and extra-societal flows of actions.' (Keohane and Nye; 1971,pp720) Keohane and Nye constructed a new model of international relations known as 'complex interdependence.' This model not only questions the main assumptions of realism, more in particular they claim states are not the sole players in world politics nor are they necessarily unitary actors as they are composed of competing bureaucracies. It was also noted that force itself may now be an ineffective instrument of policy; the traditional hierarchy of issues with military/security matters dominating economic and social ones is now replaced by an agenda in which a clear hierarchy of channels does not exist. (Keohane and Nye; 1971, pp 24-25) The existence of multiple channels of contacts among societies implies that transnational actors, trans-governmental relations and international organisations play an active role in world politics. ...read more.

(Young; 1972,pp 136-137) In conclusion it is relatively easy to distinguish the state as the most dominant actor in world politics when viewing various states actions. The US is perhaps the most important state in the world and an example of their influence on world politics is shown through their refusal to sign the landmine treaty. Additionally there is Iraq a comparatively small state that due to its statehood employs practices of flouting international regimes, such as resisting the non-proliferation regime, which a NSA would never have the power to do. However it is clear, that many state practices and diplomatic relations would not be able to occur without the participation of the NSA's that are relevant. This is where although classic realism is no longer applicable, states still achieve dominance as they participate in world politics regardless of the issues at hand. NSA only generally participate in the issues that have relevance to them, therefore never really allowing them as a whole to gain equal standing with states. The mixed actor system perspective seems to be the way in which world politics will continue to be practised. Subsequently, the response to initial question would have to be that although states are still the dominant actors, within their particular area of expertise NSA can influence and participate in world politics at the highest level possible. ...read more.

This isn't a bad attempt at all. The analytical frameworks used are good and the essay contains a lot of relevant information. What is missing is more of a 'red thread' - a consistent argument running through the essay. As it is, some of the most interesting points come at the end and not within a context that uses them to their best effect.