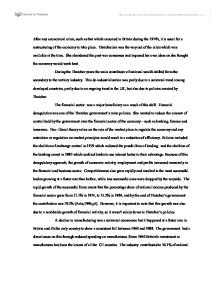 What impact did the Thatcher years have on Britain's economic structure?

After any economical crisis, such as that which occurred in Britain during the 1970's, it is usual for a restructuring of the economy to take place. Thatcherism was the way out of the crisis which was available at the time. She abandoned the post-war consensus and imposed her own ideas on she thought the economy would work best. During the Thatcher years the main contributor of national wealth shifted from the secondary to the tertiary industry. This de-industrialisation was partly due to a universal trend among developed countries, partly due to an ongoing trend in the UK, but also due to policies enacted by Thatcher. The financial sector was a major beneficiary as a result of this shift. Financial deregulation was one of the Thatcher government's main policies. She wanted to reduce the amount of control held by the government over the financial sector of the economy - such as banking, finance and insurance. Neo -liberal theory relies on the rule of the market place to regulate the economy and any restriction or regulation on market principles would result in a reduction of efficiency. Policies included the abolition of exchange control in 1979 which widened the possibilities of lending, and the abolition of the banking corset in 1980 which enabled banks to use interest better to their advantage. Because of this deregulatory approach, the growth of economic activity, employment and profits increased massively in the financial and business sector. ...read more.

If this happened, there would be an increase in the money supply. In contrast to Keynesians, monetarists were not prepared to stimulate the economy by investing money it might not have. The 1979 Budget showed this, as its main aim was to reduce the budget deficit, unlike prior attempts which allowed a deficit in order to keep unemployment low. By the mid 1980's the first surplus budget in post-war history was announced. Closely linked to the policy of reducing government spending is the third strand of Thatcher�s monetary policy. She saw a need for a free-market economy with minimal government intervention, or laissez-faire. The only role that government should play is the control of the supply of money in the economy. Instead of the government setting policies, the market should decide the level of things like wage settlements. Again, this was a major break from Keynesian thinking. Thatcher thought an orientation towards the needs of the market would modernise the economy and society, ridding Britain of uncompetitive structures and encouraging entrepreneurial spirit. Up until now, Britain had had a mixed economy, with a similar share of both public and private firms and bodies. Thatcher completely reorganised it into a private market-based economy through her seemingly endless programme of privatisation. This encouraged the free-market economy by increasing the size of the private sector while decreasing the size of the public sector, therefore allowing market forces more influence in the economy. ...read more.

In 1989, unemployment figures had been brought down to just under the 1980 level. During a recession, when the economy is slow and many people are out of work, there is a greater need for social security benefits. This caused a strain on the welfare state. What made it worse was that, because Thatcher had sold off so many council houses, people having their homes repossessed had to be housed in expensive Bed and Breakfast hotels which cost the government even more money. Thatcher completely changed the face of the National Health Service. It had been an established comfort since the Beveridge Report, that the NHS should be free at the point of delivery. Thatcher introduced prescription charges and dental charges. She also introduced internal markets into the NHS through the idea of Fund Holding GP's. GP's who were 'efficient' and were left with a surplus left over at the end of the year would be able to reinvest that money into their practice. Those who did not use their money so 'wisely' would go bankrupt and have to be shut down. GP's would buy operations from hospitals with their funds, so the 'survival of the fittest' also applied to hospitals. Margaret Thatcher and her government completely restructured Britain's economy. The main contributor to national wealth shifted from secondary to tertiary industry and she changed the whole focus of the economy by switching from Keynesian demand-centred policy, to monetarist supply-centred economics. She privatised nearly all of Britain industries and made huge tax cuts. She also changed the face of the welfare state. ...read more.