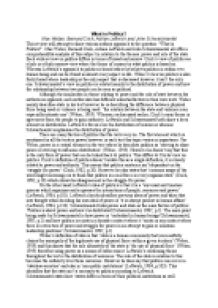 What is Politics? Discuss the views of Max Weber, Bernard Crick, Adrian Leftwich and John Schwarzmantel

﻿What is Politics? Max Weber, Bernard Crick, Adrian Leftwich and John Schwarzmantel This review will attempt to show various authors approach to the question: ?What is Politics??. Max Weber, Bernard Crick, Adrian Leftwich and John Schwarzmantel all offer a comprehendible analysis of this subject in relation to the themes: power and role of the state. Each writers view on politics differs in terms of broad and narrow. Crick?s view of politics as a hole is a fairly narrow view where the theme of consent is what politics is based on. Whereas Leftwich?s approach to politics is broad where he believes politics is within ever human being and can be found in almost every aspect in life. Weber?s view on politics is also fairly broad where leadership is the only aspect that is discussed however it isn?t the only one. Schwarzmantel?s view on politics is related mainly to the distribution of power and how the relationship between two people can be seen as political. ...read more.

On the other hand Leftwich?s idea of politics is that it is a ?universal and timeless process which organizes and expresses the interactions of people, resources and power? (Leftwich, 1984, p.101). Leftwich clearly identifies previous ideas of power and takes that into thought when deciding his own idea of power is ?it is always present in human affairs? (Leftwich, 1984, p.110). Schwarzmantel links power and state as the main factors of politics: ?Politics is about power and how it is distributed?(Schwarzmantel, 1987, p.2). The main point being made by Schwarzmantel is how power is ?embodied in human beings?(Schwarzmantel, 1987, p.2) and how politics is exists in a broader context where it ?exists in any context where there is a structure of power and struggle for power in an attempt to gain or maintain leadership positions? (Schwarzmantel, 1987, p.2) Weber?s definition of state is that ?state is a human community that (successfully claims the monopoly of the legitimate use of physical force within a given territory? (Weber, 1919) ...read more.

However Weber?s reasoning for this is due to maintaining power of the state as ?territory is on the characteristics of state? (Weber, 1919) and the ?state is considered the sole source of the right to use violence? (Weber, 1919) In conclusion the question: ?what is politics?? has been given sufficient debate by various authors. Max Weber, Bernard Crick, Adrian Leftwich and John Schwarzmantel have all got varying view on the issue, with each of them articulating their own view with justification to their points. Weber?s views on politics show that the power is an element of politics but how it used defines politics as a whole for him. Leftwich?s broad view on how politics is present everywhere proves that politics doesn?t have to contain particular elements but should be considered an activity. Crick on the other hand has the appeal of discussing how the struggle for power isn?t a real thing but has been made to seem the most important. Schwarzmantel makes the interesting point that in every relationship there is politics as one can impose their will on others. ...read more.