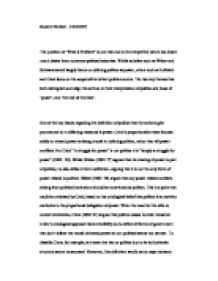 What is politics? Whilst scholars such as Weber and Schwarzmantel largely focus on defining politics as power, others such as Leftwich and Crick focus on the scope within which politics occurs.

Student Number - 110118471 The question of 'What is Politics?' is one that due to its interpretive nature has drawn much debate from numerous political scientists. Whilst scholars such as Weber and Schwarzmantel largely focus on defining politics as power, others such as Leftwich and Crick focus on the scope within which politics occurs. The two key themes that both distinguish and align the authors in their interpretation of politics are those of 'power', and 'the role of the state'. One of the key issues regarding the definition of politics that the authors give prominence to in differing measures is power. Crick's proportionalist view focuses solely on shared power as being crucial in defining politics, rather than all power conflicts. For Crick "A struggle for power" is not politics it is "simply a struggle for power" (1982: 20). Whilst Weber (1991: 77) agrees that the sharing of power is part of politics, he also defies Crick's definition, arguing that it is not the only form of power related to politics. ...read more.

This claim, although largely unverifiable, gains strength when put into practice since it is logical that the most efficient way to coerce politically would be to make people believe that how they act is in their own interests. Although Crick may respond that this use of power is not political, as it isn't about compromise, it is clear that such an application of power does have political consequences as it would have a significant impact on political interests, which are a key component in Crick's view of politics. The "tolerance of different truths" and "open canvassing of rival interests" that Crick (1982: 18) sees as fundamental to politics are clearly susceptible to the moulding power that Schwarzmantel addresses. As Schwarzmantel states, "choice does not take place in a vacuum" (1987: 11), and so the factors that affect choice should also be considered when debating the definition of politics. ...read more.

This is a view which is particularly important to analyse due to its global implications; as it renders international relations between states as being non-political due to the lack of an authoritative world government. This is a view which is contested by Schwarzmantel who argues there is generally an agreement that "politics refers to the relationship between states on an international scale" (1987: 1). The strength of this counter argument is compounded by Weber's definition of politics as competition for power (1991: 78). This struggle for power is clearly evident internationally with superpowers, transnational bodies, and non-governmental organisations all actively seeking to influence the distribution of power. Thus Crick's view that politics doesn't exist internationally is regarded as misplaced in the approaches to politics of both Weber and Schwarzmantel. As the discussion on the question of 'What is politics?' is a subjective one, it logically follows that is unlikely that any universal definition will, or needs to, be reached. As this review has shown, these authors share substantial similarities and differences in defining politics, with much insightful debate and analysis arising as a consequence. ...read more.