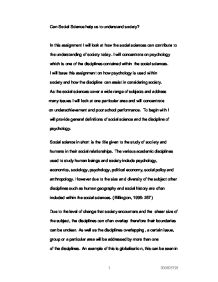 what is social science

Can Social Science help us to understand society?

the understanding of society today. I will concentrate on psychology

which is one of the disciplines contained within the social sciences.

I will base this assignment on how psychology is used within

society and how the discipline can assist in considering society.

on underachievement and poor school performance. To begin with I

will provide general definitions of social science and the discipline of

humans in their social relationships. The various academic disciplines

used to study human beings and society include psychology,

anthropology. However due to the size and diversity of the subject other

disciplines such as human geography and social history are often

the subject, the disciplines can often overlap therefore their boundaries

can be unclear. As well as the disciplines overlapping, a certain issue,

of the disciplines. An example of this is globalisation, this can be seen in

the statement below which was written by author Kath Woodward and

can be found in her book titled ‘Social Sciences : The Big Issues’;

For example globalization has been of interest to all

disciplines within the social sciences and, although they

have taken different approaches, this can be seen as an

indicator of an interdisciplinary position, where the

phenomenon under investigation takes priority, rather

than the traditional concerns of the discipline.

an expert of a single discipline be it psychology, anthropology or

another of the disciplines previously mentioned. A social scientist

will have in depth knowledge of an academic discipline and may

also have obtained qualifications enabling them to analyse, explain

and evaluate the various issues and needs faced by society.

information and theories to help society understand the ways

to change in an effort to predict how people will behave in the future.

The social sciences offer claims and concepts to help us understand

people and the social world by looking at the issues facing society.

The discipline I will concentrate on is psychology. Psychology is

defined as the scientific study of behaviour and experience. It is the

study of how human beings and other species think, learn, sense,

Psychology has different areas within it therefore there are various

types of  psychologists such as educational, forensic, organisational,

There are four main goals in psychology these are: Description,

Explanation, Prediction and Change. Description is the goal that

specifies what has occurred in an attempt to identify the behaviour.

Explanation is the second goal, it aims to establish why the behaviour

has occurred, whether it is the effect of nature (genetic factors)

or nurture (environmental factors). The next goal is prediction,

this goal associates behaviour with a condition or situation

that is known to encourage a particular type of behaviour.

The final goal is change, this goal aims to change behaviour by

faces, for example the goals could be used to assess the reasons for

underachievement and poor school performance with a view to

improving the situation by identifying the causes. It is necessary

one is attempting to understand. A description gives an overview and

sets the context. In this case it is the level of underachievement and

poor school performance. The second goal be used to gain an

‘explanation’ and therefore identify the cause. In this case four

different reasons for poor achievement have been identified by

The third goal of ‘prediction’ looks at whether there are conditions

or situations associated with under achievement and poor school

performance. For example in the past inner city schools have achieved

lower grades than comparable schools in leafy suburbs. All Hull

schools are inner city schools whereas schools within neighbouring

East Riding of Yorkshire are not. In 2004 Hull was at  Get figures from

BBC website. With a pass rate of …. East Riding was at position

The fourth goal ‘change’ aims to improve the situation through the

application of psychological knowledge. This could be done by

concentrating on individual support for students. To avoid negative

available to students whom are academically unable to obtain a ‘C’

grade or above at General Certificate of Secondary Education (GCSE)

level as stated on the BBC News and Education website.

Attempts to change student attitudes to learning through

encouragement may also help to improve the situation.

The theories and psychological goals stated above imply that school

performance and achievement can improve if the relevant changes

are applied. Is this simply an assumption or can this be proved?

Two years ago Hull was at the bottom of the GCSE league table,

confirmed that Hull has provisionally moved up thirty two places from

attempt to improve Hull’s position on the countries GCSE league

officials had improved performance by concentrating on individual

An alternative secondary education qualification has been introduced

to give all students an equal opportunity to gain qualifications.

students attitude to learning through encouragement and believing

in the future of their city. It could be said that the use of psychology

has assisted in encouraging students of Hull by promoting

the good future they could have in the city their education.

great deal about society. In particular I feel I have identified that the

improvement in Hull’s performance has been influenced greatly by the

research and studies establish a ‘cause and effect’ of an issue

and therefore greatly contribute to policies valuable to society.

By assessing the impact of policies social scientists assist us to

understand and cope with the changes in society. I believe that in this

assignment I have shown how the social sciences can positively guide

and assist us thus improving the society for all.

Exploring Self and Society.