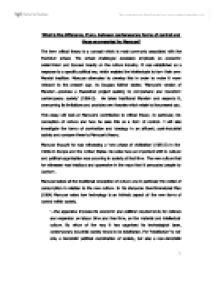 What is the difference, if any, between contemporary forms of control and those enumerated by Marcuse?

What is the difference, if any, between contemporary forms of control and those enumerated by Marcuse?

The term critical theory is a concept which is most commonly associated with the Frankfurt school. The school challenged excessive emphasis on economic determinism and focused heavily on the culture industry. It was established as a response to a specific political era, which enabled the intellectuals to form their own Marxist tradition. Marcuse attempted to develop this in order to make it more relevant to the present age. As Douglas Kellner states; ‘Marcuse’s version of Marxism...provides a theoretical project seeking to comprehend and transform contemporary society’ (1984:5).  He takes traditional Marxism and expands it, overcoming its limitations and provides new theories which relate to the present day.

This essay will look at Marcuse’s contribution to critical theory. In particular, his conception of culture and how he sees this as a form of control. I will also investigate the forms of domination and ideology in an affluent, post-industrial society and compare these to Marcuse’s theory.

Marcuse thought he was witnessing a ‘new phase of civilization’ (1955:3) in the 1950s in Europe and the United States. He noted how an important shift in cultural and political organisation was occurring in society at that time. The new culture that he witnessed was insidious and oppressive in the ways that it persuaded people to conform.

Marcuse looked at the traditional conception of culture and in particular the notion of consumption in relation to the new culture. In his discourse One-Dimensional Man (1964) Marcuse notes how technology is an intrinsic aspect of the new forms of control within society.

‘...the apparatus imposes its economic and political requirements for defence and expansion on labour time and free time, on the material and intellectual culture. By virtue of the way it has organised its technological base, contemporary industrial society tends to be totalitarian. For “totalitarian” is not only a terroristic political coordination of society, but also a non-terroristic economic-technical coordination which operates through the manipulation of needs by vested interests. (Marcuse, 1964:5)

He notes how capitalism controls society through economics and technology. More profoundly, how it manipulates our needs to make us think we require things that we do not, so that our need is understood as a need for consumption. This affluent society seemed to be undermining Marx’s theories of a revolution; ‘non-conformity with the system itself appears to be socially useless’ (Marcuse 1964:4) and counter-productive. The one-dimensional society that Marcuse describes is not rational. It does not need rules, as the main mechanism it operates is through the activity of consumption itself. Contemporary forms of control create new needs; ‘social control is anchored in the new needs which it has produced’ (Marcuse 1965:11). Therefore, it is difficult to distance yourself from society as the constant threat and menace from capitalism has become a deep set, imbedded belief.

Similarly, Adorno and Horkheimer note how ‘the triumph of advertising in the culture industry...is that consumers feel compelled to buy and use its products even though they see through them’ (1997: 30). They argue that the consumer becomes pacified and is manipulated by advertisers to create needs and promote the status quo.  Popular culture ‘impresses the same stamp on everything’ (Adorno and Horkheimer 1997:120), encouraging conformity and homogeneity within society. Adorno’s concept of ‘pseudo individualism’  refers to how the industry try to convince us that we have free choice and diversity within popular culture.

In assessing these different claims, my view is that the forms of control in contemporary society are more subtle. The influence of the internet and mobile phones creates a global status quo which seems to be more powerful and dominant. Capitalism has found new ways of making society conform and become one-dimensional. ‘An example of this tightening one-dimensionality that is especially relevant is the currently popular notion of "branding", in which the consumer is cunningly infected by brand names that then become an integral part of his self-identity’ (Amidon, 2000:2). Robert Blauner also sees ‘technology as the major factor influencing the behaviour and attitudes of workers’ (Haralambos 1991:327).

Marcuse believed that people are not free because they function within systems such as the economy. He distinguished between ‘true and false needs’. ‘”False” are those which are superimposed upon the individual by particular social interests in his repression’ (1964:7). The needs are pre-conditioned and although they can gratify the individual they also ‘perpetuate toil, aggressiveness, misery and injustice’ (1964:7). Marcuse argues that the only needs we have are basic and traditional needs, in terms of food, shelter and clothing.  The new needs are formed by capitalism in order to reproduce it and maintain social order and prevent individuals from being free. Members of society seek fulfilment in their commodities and therefore ‘industrial man or women is alienated from every sphere of his or her life’ (Haralambos 1991:316). Similarly, in Repressive Tolerance (1965) Marcuse talks about how people in advanced industrial societies are still not free. Repressive tolerance ensures that individuals believe that they have freedom of speech in an open society, when in reality their freedom is being restricted by capitalism.

Marcuse describes affluence as a kind of blackmail, which permitted a degree of domination over the desires and actions of individuals. Marcuse called this a ‘containment of social change’ through ‘a comfortable, smooth, reasonable, democratic unfreedom’ (1964:3). This describes how people can have their own opinion but must conform within society. Society seemed to be free, but was actually totalitarian. This form of ‘democratic unfreedom’ can still be seen in Britain today. The recent postal strikes are an example of individuals who opposed the status quo and gained freedom, but within the rules of society.

In Marx’s theory of alienation he argues that individuals’ identities are defined by work and their commitment to it would be the basis of their class consciousness. In the eighteenth century, capitalism was able to discipline individuals in terms of turning up to work. Commodification of leisure has now had the same effect. In contemporary society the digitalisation of television ensures that we are disciplined in terms of work. We can now record programmes at a point of convenience so that we are not late for work, consequently, we have to work in order to afford this leisure.

C. Wright Mills talks about historical needs in ‘The Sociological Imagination’ (1959). He suggests that people look at their own personal problems as social issues and try to connect them with the workings of society. The sociological imagination is evidently about considering other ways of thinking about the social world and moving beyond what we are told. As Individuals we have the capability to be creative and intellectual in a democratic system. However, these forms of needs are in opposition to capitalism.

High culture is one way of thinking revolutionarily again beyond the everyday. For example, the opera is expressive and creative and in enjoying it we are able to imagine the world differently. As Adorno argues ‘In [popular music], once the trained ear heard the first note of the hit song, it can guess what is coming and feel flattered when it does come…The result is a constant reproduction of the same” (1979: 125, 134). He claims serious music is not formulaic and standardized, therefore allowing the audience to disrupt the status quo.

Marcuse noted how the bourgeois and the proletariat seemed to have an ‘overriding interest in the preservation and improvement of the institutional status quo’ (1964: xliii).  Marcuse developed Marx’s theory of alienation since now ‘people recognize themselves in their commodities; they find their soul in their automobile, hi-fi set, split-level home, kitchen equipment. The very mechanism which ties the individual to society has changed, and social control is anchored in the new needs which it has produced’ (Marcuse 1964:11). Thus, ideology is no longer in religion or laws, our illusions and beliefs are within commodities and the notion of consumption.

Marcuse noted how this intensity of ideology integrated the working class. ‘Freedom of enterprise was from the beginning not altogether a blessing’ (Marcuse 1964: 4) and mechanization reduced ‘the quantity and intensity of physical energy expended in labour’ (Marcuse 1964:32). There was a general shift away from manual labour and far greater occupational stratification. Marcuse noted how there was a containment and closure of political alternatives. The working class were no longer a form of ‘negativity’ and therefore due to integration, would not have collective refusal and form a revolution. Until the emergence of the 1950s Marx was right in thinking that there could be a rebellion against capitalism. However, in the post war period, social integration was so successful that the working class were now inside the social system that capitalism had created.

In conclusion, Marcuse's analysis of highly advanced societies is accurate and useful. There does not seem to be any difference between contemporary forms of control and those enumerated by Marcuse. Nevertheless this could be because we still live in a capitalist society and as long as we do, the ways in which we are controlled will never change. As Paul Mattick states ‘What Marcuse relates as typical for ‘mature capitalism’ has been typical all along, only the social consequences where less devastating’ (1972:39). However, Marcuse does not provide realistic solutions to the problems he raises. His point seems to be that if societies can learn to use technologies in ways that benefit citizens, instead of restricting them, then the problems of humans will be solved.

Michel Faucault (2003) presents a contemporary form of critical theory. Rather than viewing power in a negative way he argues ‘that even at their most constraining, oppressive measures are in fact productive, giving rise to new forms of behaviour’. Perhaps we should look less at what capitalism has done and focus more on what we can do to be more individual whilst in the society that surrounds us.

I feel that it is not that individuals lack the ability to form their own authentic and affirmative culture. It is that capitalism has become too powerful to overthrow and therefore, even if society does try to overcome it, capitalism will incorporate the alternative into its industries and continue a one-dimensional society.

Marcuse, H., (1964) One-Dimensional Man, ‘Introduction to the First Edition – The paralysis of criticism: society without opposition’.