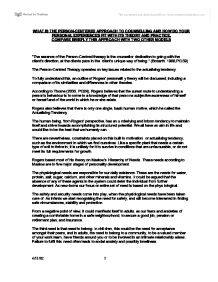 What Is the Person-Centered Approach To Counselling and How Do Your Personal Experiences Fit With Its Theory and Practice.

WHAT IS THE PERSON-CENTERED APPROACH TO COUNSELLING AND HOW DO YOUR PERSONAL EXPERIENCES FIT WITH ITS THEORY AND PRACTICE. COMPARE BRIEFLY THIS APPROACH WITH TWO OTHER MODELS "The essence of the Person-Centred therapy is the counsellor dedication to going with the client's direction, at the clients pace in the client's unique way of being." (Bozarth. 1988,PG 59) The Person-Centred Therapy operates on key issues related to the actualising tendency. To fully understand this, an outline of Rogers' personality theory will be discussed, including a comparison of its similarities and differences to other theories. According to Thorne (2000, PG24), Rogers believes that the surest route to understanding a person's behaviour is to come to a knowledge of that persons subjective awareness of himself or herself and of the world in which he or she exists. Rogers also believes that there is only one single, basic human motive, which he called the Actualising Tendency. The human being, from Rogers' perspective, has an underlying and inborn tendency to maintain itself and strive towards accomplishing its structured potential. We all have an aim in life and would like to be the best that we humanly can. There are nevertheless, constraints placed on this built in motivation or actualising tendency, such as the environment in which we find ourselves. ...read more.

The superego works in conjunction with the ego as the conscience and reinforces it by negotiating reality with the id. According to Freud, the ego and superego join forces to place unacceptable ideas and impulses out of the awareness; this is a psychic defence known as repression. Rogers emphasises that in most people, there is a huge discrepancy between the self as perceived and the actual organism, because of their need for positive regard. Anxiety and confusion often crop up as a result of this incongruence. In a person's search for positive regard, they could be forced to internalise numerous conditions of worth and have very little faith in their own judgement. Regardless of what face they choose to present to the world, they are still likely to hold themselves in low esteem and have no confidence in their capacity to make appropriate decisions. Such persons according to Rogers, lack an internalised focus of evaluation. The distinctive and sole aim of the Person-Centred Therapy is to "facilitate personal growth through the relationship between the counsellor and the client." (Cave 1999 PG72) The theory is unique in its own way, because the counsellor does not intervene and has no intention of intervening. The client is given the freedom to take control of their own problems, and direct him or herself towards a solution. ...read more.

TA therapy is most often classed among the humanistic approaches to personal change, because of its emphasis on personal responsibility, equal relationship between client and counsellor, and the intrinsic worth of the person. However, TA also shares some characteristics with the behavioural approaches, notably in its use of clear contract-making; and TA's central theoretical ideas were drawn directly from the tradition of psychodynamic thought. (Stewart & Tilney ) There are nevertheless implications of the person-centred therapy which according to Bozarth 1984, is seen as a functional premise that precludes other counsellor intentions. The counsellor goes with the client, at the client's pace, goes with their ways of thinking, of experiencing and processing. The counsellor is restricted from having other intentions without violating the Person-Centred Therapy. The counsellor could violate the requirements of this therapy by inventing suggestions treatment goals. Rogers' belief of growth and his profound respect for allowing the client to find his or her own answers in the right psychological conditions, led to simplicity of practice, which masked, to uninitiated the enormous demands placed upon the counsellor. (Thorne 1992 PG58) The counsellor does not promote any feelings, by intervening or making suggestions. Instead, the counsellor gives the client the opportunity to realise that they are good and can make valued decisions for themselves, without depending on an external locus of evaluation. ...read more.