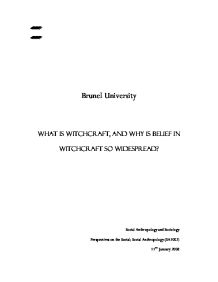 What is witchcraft, and why is belief in witchcraft so widespread?

and the terms used to describe legitimate practitioners. The use of this term is often found to be an accusation towards individuals who are suspected of causing harm. Belief in this stereotype is common amongst most of the indigenous populations of the world, including Europe, Africa, Asia and America. Depending on the values of a society, witchcraft may be regarded with varying levels of respect or suspicion, and in other cases totally ambivalent, whereby witchcraft is considered as neither good or evil. False ideas about witch hunts persist today, they mainly occurred during the era of the Renaissance, the Reformation and the Scientific Revolution. Not all persons accused of witchcraft were women, there were "witches" of all ages and sexes. Many innocent people have lost their lives because of the widespread belief of the malicious nature of magic, predominantly amongst the Africans whereby witchcraft is the cause of their many misfortunes. In Tanzania alone, between the years 1997 and 2000, Diwan states that there were approximately 400 alleged witches killed. The execution of these innocent lives not only "demonstrates how dangerous and destructive witchcraft beliefs can be, but it also reflects a defect in society and the collapse of modern values" (Diwan, 2001). ...read more.

Whilst there are questions unanswered there will always be a form of explanation or different methods of reaching answers, wether they are identifiable or easy to relate to by certain individuals or not, it is essential to understand that histories within different cultures have a method to explain certain phenomena. In the western community witchcraft is perceived to many as something that can incorporate both good and bad, but with a history of misconstrued concepts and literature a false picture has been painted. It is also considered to be a persons free choice to learn and practice magic with the help of the supernatural in the west whereas elsewhere, it is believed to be inherent supernatural powers. With such a wide range of concepts such as magic, sorcery, religion, folklore, theology, technology, and diabolism, witchcraft is open to a hugely vast and diverse community throughout the world, and by doing so allows it to carry itself through the past, the present and undoubtedly the future, up until different answers, theories and beliefs are made/concluded. No matter what the outcome, with a history as conflicted and widespread, there will always be an interest in witchcraft - whether large or small. APPENDICES Any appendices should appear after the text of your term paper. ...read more.