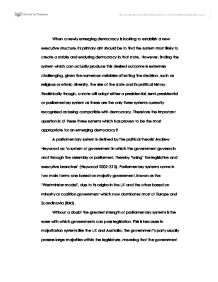 What kind of executive structure should a newly emerging democracy choose: parliamentary, presidential or semi-presidential? Using empirical evidence discuss the strengths and weaknesses of each.

When a newly emerging democracy is looking to establish a new executive structure, its primary aim should be to find the system most likely to create a stable and enduring democracy in that state. However, finding the system which can actually produce this desired outcome is extremely challenging, given the numerous variables affecting the decision, such as religious or ethnic diversity, the size of the state and its political history. Realistically though, a state will adopt either a presidential, semi-presidential or parliamentary system as these are the only three systems currently recognised as being compatible with democracy. Therefore the important question is; of these three systems which has proven to be the most appropriate for an emerging democracy?

A parliamentary system is defined by the political theorist Andrew Heywood as; ‘a system of government in which the government governs in and through the assembly or parliament, thereby ‘fusing’ the legislative and executive branches’ (Heywood 2002: 313). Parliamentary systems come in two main forms; one based on majority government, known as the ‘Westminster model’, due to its origins in the UK and the other based on minority or coalition government which now dominates most of Europe and Scandinavia (ibid).

Without a doubt the greatest strength of parliamentary systems is the ease with which governments can pass legislation. This is because in majoritarian systems like the UK and Australia, the government’s party usually possess large majorities within the legislature, meaning that the government has almost complete free reign over policy. Although this may sound authoritarian in nature, it does mean that the government can act on the manifesto promises they made to the public. For instance, following the 1996 Australian general election, John Howard’s Liberal government was able to use its parliamentary majority to act on the campaign promise to cut funding to universities and other federal institutions (Mark Denne 2007, http://www.realtruth.org). A majoritarian parliamentary system could therefore be suitable for an emerging democracy, as this ability to implement policy swiftly is essential in order to bring about the reforms needed to consolidate the democratic gains already made.

However, it is possible that this strength can be turned into a weakness as the government can evolve into what Lord Halisham famously labelled ‘an elective dictatorship’; where the legislature essentially becomes subservient to the executive branch. For example in 2004, Tony Blair’s Labour government was able to introduce university top up fees despite having the support of only one member of the opposition in parliament (BBC 2004, http://news.bbc.co.uk). It could therefore be argued that this system is inappropriate for an emerging democracy because, instead of using its legislative power to consolidate democracy, the majority party may use it to push through an authoritarian agenda - as was the case in Nigeria under the old parliamentary republic in the 1960s (Horowitz 1990: 74).

In parliamentary democracies that use proportional electoral systems we often see the formation of coalition governments. This system has proven to be particularly effective in states which contain a diverse range of ethnic, religious or linguistic groups. For example, the adoption of a parliamentary system in Belgium was designed specifically to incorporate the various linguistic groups which co-exist in the country (Belgian Senate, 2009 http://www.senate.be). For an emerging democracy which is particularly diverse, it could be argued that this system would best meet their needs as the various groups in society could be represented in government, thus ensuring that no one group dominates the agenda.

Unfortunately, history tells us that coalition governments are prone to instability and collapse. In January 2009, we witnessed this assertion first hand when Iceland’s coalition government collapsed under the strain of the economic crisis (BBC 2009, http://news.bbc.co.uk). This problem is something that emerging democracies must seriously bear in mind when deciding whether to adopt this system. Given that the state is likely to face serious obstacles in the early stages of the regime such as the prospect of civil war or a military coup, a weak coalition government might not be the best option.

Presidential government comes in two main forms; two party regimes like the one that has flourished in the USA for over 200 years and multi-party regimes which now dominate Latin America.

Arguably the greatest strength of presidential systems lies in their adherence to the doctrine of separation of powers. This principle means that in theory the executive branch cannot dominate the legislature thus preventing the idea of an ‘elective dictatorship’ that is common to parliamentary systems. For example in May 2009, the USA’s upper chamber of Congress, the Senate, rejected President Obama’s request for $80 million to close Guantanamo Bay Prison (CNN 2009, http://edition.cnn.com). It could therefore be argued that if an emerging democracy wants stability it should emulate the USA by adopting a presidential system with a strong separation of powers, as this way there is less chance of the executive becoming too powerful and ultimately returning the state to an authoritarian regime.

Although the separation of powers is an effective safeguard against executive dominance, it does mean that there is often legislative gridlock. This is especially the case when the legislature and presidency are controlled by different parties or when there is a multi-party system like there is in most of Latin America. In Brazil, there is a multi-party presidential system where the president’s party holds only a small proportion of the seats in the legislature. Currently, President Lula Da Silva’s party holds just 16% of the seats. (Raile, Pereira & Power 2006).  As a result of this, Presidents often resort to backhanded tactics. For instance in 2005 it was discovered that President Da Silva had been illegally paying members of the Brazilian legislature in order to keep up discipline (ibid). This example illustrates that although the adoption of a presidential government may help stabilise democracy, in a state, it can actually reduce the effectiveness of the government.

The political scientist Robert Elgie argues that a semi-presidential regime should be defined as; ‘the situation where a popularly-elected, fixed-term president exists alongside a prime minister and cabinet who are responsible to parliament’ (Elgie 2004). The French Fifth Republic is said to provide the archetype for the semi-presidential executive, although other countries such as Finland and Sri Lanka have adopted their own variations of the system (Hague and Harrop 2007: 345).

A major problem that can arise in semi-presidential systems is the competition for power between president and prime minister. This becomes especially likely when the president and prime minister are drawn from different parties. For example in Sri Lanka, from 2001-2004 there was a constant power struggle between President Kumaratunga of the Sri Lanka Freedom Party and Prime Minister Wickremesinghe of the United National Front.  The struggle came to a head in 2003, when conflicting views over how to deal with the Tamil Tigers resulted in the president firing three of the prime minister’s key ministers (India News 2003, http://news.indiamart.com). For an emerging democracy this sort of political infighting could prove devastating because when; ‘each actor claims to be the legitimate authority and tries to assume power at the expense of the other, democracy as a whole can suffer.’ (Elgie 2004)

After examining the three different systems of government, it has become clear that there is no such thing as an ideal system for all emerging democracies, because each state has different requirements. However, we can pick out certain trends. For example, countries which have extremely heterogeneous societies seem to be better suited to coalition government in parliamentary systems because all the different groups can have their voices heard. On the other hand, in homogeneous societies democratic stability may be seen as more important than minority representation; therefore a presidential system might therefore be more appropriate in this case. In general, it would appear that the smartest choice for an emerging democracy would be to adopt the semi-presidential system because of its adaptability.  For instance, if it turns out that the government isn’t performing as well as expected, one could strengthen either the parliamentary or presidential elements of the system, depending on the circumstances. In this respect semi-presidential government could be seen as a valuable transitional model for an emerging democracy.