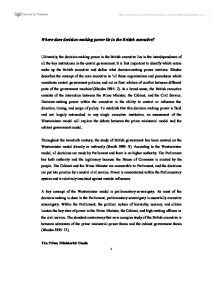 Where does decision-making power lie in the British executive?

The fact that the Prime Minister has no clearly defined role leaves the powers of the post largely dependent on the political context, situation, and personality. Though the Prime Minister has many resources, these are essentially powerless without support from rest of the executive. In extreme cases, the lack of support by the Cabinet or Parliament can lead to the resignation of the Prime Minister. G.W. Jones gives an account of how Thatcher was forced to resign in 'The Downfall of Margaret Thatcher'. He says: 'She was murdered: assaulted by blows from three sources'. The first blow was by a drop in public opinion polls after a series of policy failures; the second came in November 1990 from the House of Commons in which she was four votes short of the winning number; the third and final blow was by the cabinet. It was only after listening to the views of her cabinet colleagues that Thatcher decided to resign (Jones 1995:103). Her view was that 'if her cabinet was against her, numbers no longer mattered' (The Economist 1991). The Prime Minister only has power when it is allowed by members of the Cabinet, the Parliament, and the British people. ...read more.

This leads to the Whitehall model of government. This model will not be discussed in detail. As Thatcher said, 'advisors advise, ministers decide'. The power of the civil service lies on influence, rather than on decision-making. The Unproductive Debate It is evident that neither the prime ministerial thesis nor the Cabinet government thesis adequately expresses the complex relationships that make up decision-making power in the British executive. This debate is limited in part by the narrow definition of power. For the proponents of either thesis, power is conceived as an object that belongs to a particular actor or institutions. It is as if power is something like a tennis ball that volleys between the Prime Minister and the Cabinet. In fact, power is fluid; it ebbs and it flows. It is held jointly by the different actors in the Core Executive: the Prime Minister, the Cabinet, and the Civil Service. The actual decision-making occurs in the Cabinet and the committees; the Prime Minister exerts a great deal of influence on the whole system through authority and personnel management; the Civil Service also has its own circuits of influence through its monopoly on expertise and information. Ultimately, executive decision-making power does not lie anywhere. Instead, it is rests on the perpetual exchange of resources by the different actors according to context. ...read more.