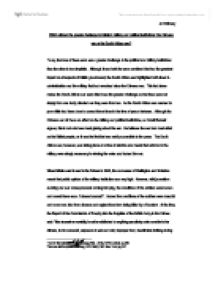 Which offered the greater challenge to Britain's military and political institutions: the Crimean war or the South African war?

Which offered the greater challenge to Britain's military and political institutions: the Crimean war or the South African war? To say that one of these wars was a greater challenge to the political and military institutions than the other is too simplistic. Although it was both the wars combined that had the greatest impact on all aspects of British government, the South African war highlighted both flaws in administration and the military that had remained since the Crimean war. This fact alone makes the South African war seem like it was the greater challenge as the flaws were not simply from one badly directed war they were from two. As the South African war seemed to prove little had been done to correct these flaws in the time of peace between. Although the Crimean war did have an effect on the military and political institutions, as Corelli Barnett argues, this is not what was most glaring about the war. He believes the war had most effect on the British people, as it was the first that was really accessible to the press. The South African war, however, was taking place at a time of election and meant that reforms to the military were simply necessary in winning the votes and indeed the war. ...read more.

However, by October many believed he was "the master of his cabinet".16 This change in government due to the Crimean war and the effects it had on Britain showed that it had a large impact on the political institution as well as the military. The government had a reputation for having bad relations with its legislature, and as Anderson says "the efficiency of cabinet government depends... not only upon the internal organisation of the cabinet, but also upon the relations between cabinet and legislature. This was the aspect of government on which contemporary doubts were gravest before war began."17 On December 12 there was an emergency parliament meeting to pass the law allowing for the enlistment of mercenaries - "proof in itself to many members that military recruitment had been bungled."18 The government's actions and administration do a lot to explain why the Crimean war was such a blunder. The administration of war was in a terrible state with lack of clarity, instruction and funds, and so the challenge presented by the Crimean war was larger thank it should have been. The Crimean war had a big effect on both military and political institutions and the challenge was a great one. It highlighted the problems and for the first time the British public knew what was happening. ...read more.

The government was dealing with something new, which they now had to face and organize. They had also instigated an election, which they also had to campaign for and win. Although they did win, in votes it was a close election: 2.4 million votes for the Tories and 2 million for the Liberals.29 The South African war was the obvious tool for both parties to use in their campaigns. While Chamberlain was saying that every seat for the liberals was a seat for the Boers, Lloyd George was attacking Chamberlain, revealing that his family had shares in ammunitions factories. This shows that the South African war offered a great challenge to Britain's political institution particularly during the time of the election. One cannot say that either of these wars simply presented a greater challenge than the either. To some extent it is hard to separate the two. The fact that issues from the Crimean war remained unresolved in 1899 meant that the South African war offered the greater challenge to Britain's military and political institutions. The great challenge was also due to its sheer size, death toll and the fact that a general election was held at the time. However, the Crimean war was also a great challenge to both institutions and was made worse by the evolution of the press and war correspondents. ...read more.