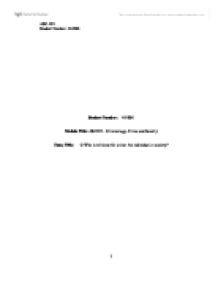 Who is to blame for crime: the individual or society?

Student Number: 404896 Module Title: ASC103 - Criminology, Crime and Society Essay Title: 2/ Who is to blame for crime: the individual or society? With a big amount of criminal's records, people are now more concerning about the reason for committing crime. However, who should we blame for the increasing number of crimes? Is it the individual problems or social problems? Should we say it is people problems in society or people in problem society? According to Gottfredson and Hirschi, lack of self-control and a lack of individual responsibility are at the root of all criminal responsibility. (Gottfredson and Hirschi, 1990) However, social blame is the most popular explanative of poverty in nearly all of the twenty countries studied. (A. Freda, Gerhard O.W. Muller, William S. Laufer, 2007). The following essay is going to discuss about individual and social explanations of causing crime and hence, we might know more about who is to blame for crime. Individual and social are two main points in the causes of crimes. In individual explanation, family and personal causes are considered and it is defined as internal factors. In classicism, crime was believed to be the result of choice. People were thought to have free will so if they committed crimes; it was because they were bad and chose to break the law. External factors, which are also social explanation, are including government problems and society problems. Positivists believe that human behaviour is determined by external factors and we do not have free will. Both internal and external factors are important in analyzing the causes of crimes: most offenders committed crime is because of the external problems at the beginning. For example, X loses much money while gambling; X then develop a desperate need for money, because rent and other bills are due' other individuals refuse to lend X money; and X later robs someone. ...read more.

showed that better behaviour was associated with schools that develop collegial relations among adults and which bring teachers into frequent contact with other stuff and with students in settings other than the classrooms. (Watkins, C. et al., 2007) Therefore, lack of collaboration between school and family is another problem. School should have affiliate with family in order to know more about the students' background. For example, if a student is growing in a broken family and his father/mother is an offender, this student should have more cares from school in order to prevent going astray. In other words, education is also necessary in the process of reducing the number of crime as it provides the sense of right or wrong. Religion can be a factor affecting their choices as well. As religion have their own rules, those who believe in God will definitely obey the rules and the law as they can. According to Hirschi and Stark's (1969) "hellfire" hypothesis, a theory posits that religion deters criminal behaviour by increasing the costs of delinquency through the promise of punishment in the afterlife. (Heaton P., 2006) It does not means all of the offenders do not believe in God but it is less likely for them to commit crime if they are a religious believer. It is because they believe there is a high cost of committing crime and also they are supposed to have a good way on mind reposing and can manage to overcome emotional through religion. Moreover, caring from brothers and sisters in church would help them much by counselling or giving some advises as their thinking is more positive and aggressive; it would definitely help them from sadness or stress. ...read more.

Moreover, in some of the movies offenders do not arrested by the police, it seems that they do not have to take any responsibilities after committing crime but they can get what they want successfully. It is because the media does not necessarily provide an accurate portrayal of these events and it will focus its attention on crimes that are 'newsworthy'. (Peter Joyce, 2006)Hence, media become a push factor for them to commit crime. What is more, Government have great responsibilities on crimes. As citizens are restrained from acting on emotions and "throw away the key" sentiments when they believe that there are principles of punishment-legal proportionality, predictions of dangerousness, and responsiveness to treatment- that require governmental expertise. (Zimring, A. & Johnson, D., 2006) Government should consider is it the policy made them really uncomfortable on it and no other ways to solve their problems so they commit crime? Compare with both individual and social explanations of the causes of crime, I would agree that individual should be blame for crime. No doubt that there are so many causes in the society as well, however, it is individual's choices at the end. If it is really the society problems, why there is only a small amount of citizens committing crime rather than all of them? Moreover, they should have learnt that committing crime has a serious consequences, they should stand firm no matter what situations they are facing. Even though those social factors are affecting them but they should have self-control and self-concept of what they should do with their own situations. There should not be an excuse for them to commit crime. Therefore I would say society factors are not the most convincing, but individual. To prevent the number of crimes keep on increasing, we should understand more about the roots of causing crime in order to find out a suitable method in preventing. ...read more.