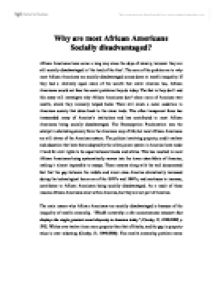 Why are most African Americans socially disadvantaged?

African Americans who live in the Ghettos really aren't free at all. They are trapped into a life that revolves around the ghetto and the chances of escape are slim. Part of the answer as to why African Americans are socially disadvantaged stems back to the slave trade. Slavery didn't just mould the lives of the slaves but also the lives and thoughts of masters, dependents of slave owning families and those non-slaveholders who lived alongside slavery (Brock, W, 1973). The slave trade sowed the seeds or racism in America and even though slavery has been abolished, racial discrimination still exists. The Proclamation Declaration of 1862-1863 was the first step to freeing the slaves (Livingstone, D, 1999, p203). It outraged many white Americans and forced white racial terrorist groups like the Ku Klux Klan (KKK) to form. Even though the KKK was outlawed, it continued to operate as an underground network. Despite the Emancipation Proclamation, it took until the 1970's before total national law reform was enforced in compliance with the 1860's amendments (Livingstone, D, 1999). Even then, much resentment and racial hatred still existed in America and still does today (Banks & Grambs, 1972). This shows that the mindset of many white Americans was affected by the lifestyle of their ancestors. ...read more.

This era brought about the mass housing developments called Ghettos in the inner cities, which increased the African American problem of being social disadvantaged. The phasing out of jobs in the labor market drove people from farms and mines into the cities to find work and housing, many of them being black (Lacy, D, 1972). While this mass influx of people into the ghetto like areas was occurring, the middle class who were mainly white were moving into the suburbs. This created a social segregation between most blacks and whites. "This sorting of the population was no accident" (Lacy, D, 1972, p217). While the blacks were being pulled into the cities the employment opportunities were being pulled out. After the Second World War another major occurrence happened, which further socially disadvantaged most African Americans. It occurred in educational development and widened the gap between the middle and lower class (Lacy, D, 1972). Once again the government had introduced another policy like social security, minimum wage, deposit insurance and housing subsidies that only benefited the well employed or rich (Lacy, D, 1972). The people who needed the most help were once again left in the cold and this usually meant the lower class, who were predominantly African American. In 1996 a serious change occurred in American policy, which further exacerbated the problem of African Americans being socially disadvantaged. ...read more.