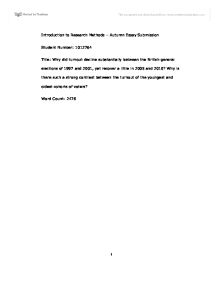 Why did turnout decline substantially between the British general elections of 1997 and 2001, yet recover a little in 2005 and 2010? Why is there such a strong contrast between the turnout of the youngest and oldest cohorts of voters?

Introduction to Research Methods - Autumn Essay Submission Student Number: 1012764 Title: Why did turnout decline substantially between the British general elections of 1997 and 2001, yet recover a little in 2005 and 2010? Why is there such a strong contrast between the turnout of the youngest and oldest cohorts of voters? Word Count: 2476 Introduction British election turnout since 1945 had not dropped below 71.2% until the Labour Party victory in 2001, where turnout was the lowest since 1918 at 59.3%. Turnout slowly increased in the 2005 election with 61.4% and then up again to 65.1% in 2010. Reasons for the steep decline in 2001 and the continuing relatively low turnout are numerous and include a reduction in campaign spending, a shift to centre ground politics and the feeling of a foregone conclusion, especially with regards to 2001. Some may say that low turnouts are now a 'permanent phenomenon' (Worcester, Mortimer, & Baines, 2005, p. 268) and this essay intends to show why turnout has followed this path and expanding on issues such as youth apathy and disengagement. Using polls and the findings of academic research, this essay will chronologically address the general elections of 2001, 2005 and 2010 in an attempt to explain the apparent voter indifference. The concluding paragraphs will summarise the findings of the essay and pose further thoughts on the topic of election turnouts. The 2001 General Election The election of 2001 shocked Britain with extremely low turnout and one of the main reasons offered for this is the perception of an inevitable labour win. ...read more.

The first of these is the expansion of the postal vote. The postal vote, although available in 2001, was used more in the 2005 election. However, 'the increase in postal voting did little to enhance the level of turnout' (Butler & Kavanagh, 2005, p. 250). Election statistics have shown little to no correlation between increased postal votes and voter turnout (Curtis, 2005, p. 128). This could be because it does not 'address the root cause of falling turnout, a lower determination on the part of electors to participate' (Worcester, Mortimer, & Baines, 2005, p. 268), in that it may facilitate voting but does not encourage it (methods of encouragement will be briefly mentioned toward the end of the essay). Ease of voting therefore cannot account for the turnout statistics. One would also assume that the invasion of Afghanistan and Iraq would lead to an increase in voters but alas we do not see this in the statistics, it did however 'reinforce the new valence issue agenda that gives priority to immigration, crime, terrorism and related national security concerns.', which goes a long way in explaining Labour's loss of popularity in 2005 as the Conservatives were rated higher on these issues. (Clark et al, 2005, p. 26) We can see the reasons behind the substantial drop in 2001 were not rectified by 2005, but there is hope in the slight rise which can be assigned to natural fluctuations or the eventfulness of Labours second term. ...read more.

The question that still remains is how governments can increase voter turnout. Conclusion and Further Thoughts It is all too easy to say that voter turnout is based on the perceived result of the election, i.e. closer contests have higher turnouts, but this assumption would mask the other factors at work. A continual betrayal of public trust by politicians through scandal and policy making have led to the alienation of the general public, the expansion of the media has given us access to the lives of our leaders and what it has revealed has tarred the political profession. This alienation can sometimes encourage voters to the polling station in order to show their disappointment, but it can equally create democratic apathy. This apathy is cultivated in homes and peer groups so that the younger generations are naturally predisposed to abstain from voting. The government's policies do little to target those who do not vote, especially young people who are underrepresented, once again resulting in a vicious circle. As previously discussed, political parties sometimes do not make enough effort in campaigning and more often than not voting turnout is influenced by current affairs and valence politics. In closing, there needs to be serious thought into measures to increase turnout. Compulsory voting has increased turnout in Australia and proportional representation can lead to an increase in the value of an individual vote, making the electorate feel like they are making more of a difference. With the growth of the internet and new media innovations such as televised debates, we are left with an unclear view of the political future. ...read more.