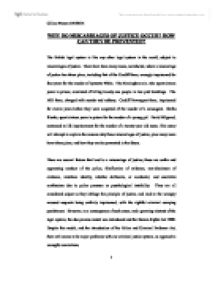 WHY DO MISCARRIAGES OF JUSTICE OCCUR? HOW CAN THEY BE PREVENTED?

WHY DO MISCARRIAGES OF JUSTICE OCCUR? HOW CAN THEY BE PREVENTED? The British legal system is like any other legal system in the world, subject to miscarriages of justice. There have been many cases, worldwide, where a miscarriage of justice has taken place, including that of the Cardiff three, wrongly imprisoned for four years for the murder of Lynnette White. The Birmingham six, who spent sixteen years in prison, convicted of killing twenty-one people in two pub bombings. The M25 three, charged with murder and robbery. Cardiff Newsagent three, imprisoned for eleven years before they were acquitted of the murder of a newsagent. Stefan Kiszko, spent sixteen years in prison for the murder of a young girl. David Milgaard, sentenced to life imprisonment for the murder of a twenty year old nurse. This essay will attempt to explain the reasons why these miscarriages of justice, plus many more have taken place, and how they can be prevented in the future. There are several factors that lead to a miscarriage of justice; these are unfair and oppressing conduct of the police, falsification of evidence, non-disclosure of evidence, mistaken identity, whether deliberate, or accidental, and unreliable confessions due to police pressure or psychological instability. ...read more.

There have also been times in the past that barristers have fabricated evidence in anticipation of them becoming the victor "in many trials, barristers are out to win and it is under such circumstances that miscarriages of justice are liable to occur. Evidence, including scientific evidence, can be manipulated in such a way as to make it appear stronger or weaker than it really is. This happens much more frequently than is generally realised" Erzinclioglu (1998). Non- disclosure of evidence by police is another concern that assists in wrongful conviction, often with the police withholding information from the defence, or the prosecution. This was the case of the M25 three, who after ten years in prison, had their convictions quashed due to irregularities, one being maintaining evidence from the defence, concerning the witness "The defence was also not told that the informer was paid a reward. Police and the witness, a key prosecution witness, had been involved in a profoundly disturbing conspiracy to give perjured evidence" (Shaw 2000) Electronic Telegraph. If this were disclosed to the defence at the time this witness would not have been allowed to testify, therefore, would the jury have reached the same verdict? ...read more.

With these in place it should help the conviction of many of the innocent people imprisoned for a crime they did not commit. Although, these changes will never completely eradicate all the miscarriages of justice, it may help but a few. Unfortunately, it is a fact that there will always be miscarriages of justice in any legal system, often with tremendous implications, very often amounting to a wasted lifetime. However, it is the truth, that only people who knows the true series of events regarding a case, is the parties themselves. It is then up to the legal systems to deduce the information presented and bequeath the fate of the parties unto them. There is immense difficulty in assessing if a case is in accordance with the facts accessible, or whether it is an elaborate fa�ade. At the moment, there is no technique that is able to eliminate these miscarriages, the government should study, in-depth the wrong doings of our criminal justice system, and change the laws that is assisting the legal individuals to wrongfully convict innocent people. As it is very sad, but a known fact, that once you have been convicted, it is a very tough, lengthy process to get your conviction overturned, sometimes, only when the real perpetrator is found can they clear you of all blame. ...read more.