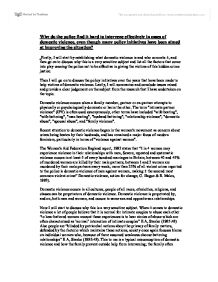 Why do the police find it hard to intervene effectively in cases of domestic violence, even though many policy initiatives have been aimed at improving the situation?

Why do the police find it hard to intervene effectively in cases of domestic violence, even though many policy initiatives have been aimed at improving the situation?

Firstly, I will start by establishing what domestic violence is and who commits it, and then go on to discuss why this is a very sensitive subject and list all the factors that come into play causing the police not to be effective in giving the victims of this hidden crime justice.

Then I will go on to discuss the policy initiatives over the years that have been made to help victims of domestic violence. Lastly, I will summarise and conclude issues raised and provide a clear judgement on the subject from the research that I have undertaken on the topic.

Recent attention to domestic violence began in the women's movement as concern about wives being beaten by their husbands, and has remained a major focus of modern feminism, particularly in terms of "violence against women".

The Women's Aid Federation England report, 1992 states that “1 in 4 women may experience violence in their relationships with men, Severe, repeated and systematic violence occurs in at least 5 of every hundred marriages in Britain; between 40 and 45% of murdered women are killed by their male partners; between 1 and 2 women are murdered by their male partners every week; more than 25% of all violent crime reported to the police is domestic violence of men against women, making it the second most common violent crime” Domestic violence, action for change, G. Hague & E. Malos, 1993).

Now I will start to discuss why this is a very sensitive subject. When it comes to domestic violence a lot of people believe that it is normal for intimate couples to abuse each other “to hear battered women recount these experiences is to hear stories of abuse which are often characterised as ‘normal’ interaction of intimate couples” E A, Stanko (1985:48)

Also people are “blinded by patriarchal notions about the privacy of family matters, defended by the rhetoric which maintains these notions, society once again focuses blame on individual women who, because of there assumed weakness choose battering relationships” E A, Stanko (1985:48). This to me is a typical misconception of domestic violence and how the family prevent outside help from intervening; the family often condone and protect the abuser by placing blame on the women finding reasons why she deserved it.

There is very powerful quote, which goes very well with this essay, which goes like this, “I have learned from my battering situation that no one believes me and that I cannot depend upon any outside help. All I have left is the hope that I can get away before it is too late. And then she goes on to say, “I have learned also that doctors, the police, the clergy, and my friends will excuse my husband for distorting my face, but won’t forgive me for looking bruised and broken and the greatest tragedy is that no one is listening” E A, Stanko (1985:48).

Modes of intervention usually fall into two categories: first attempts to protect the victims of violence through the law, police, housing and accommodation. Second, therapy and counselling but the one I will be considering is the intervention from the police and there policies aimed at the intervention of domestic abuse.

In 1971, a refuge opened the first safe house for women and children experiencing domestic violence. Today there are over 400 refuges nationally and domestic violence receives much greater attention, and the police do intervene by advising victims if they have nowhere to go then this could be worth thinking about.

Domestic violence is a crime under the 1976 domestic violence act; however, the police until recently have rarely treated it as such though of course some police officers and police departments attempted to do so. Edwards (1989) quotes this extract from this police training manual ”the officers role is to preserve the peace in domestic disputes, the power of arrest should only be exercised as a last resort the officer should never create a police problem when there is only a family problem existing”, R Dallos & E McLaughlin (1993:28). This to me shows that the police were apprehensive to arrest men for domestic abuse.

November 2004. The key measures in the Act, which will offer victims of domestic

Violence more protection and intervention from the police, some of the key policies that have been implemented are making common assault an arrestable offence by adding it to the list of offences for which a police officer may arrest without a warrant; also extending the availability of restraining orders to all violent offences. This includes cases where there has been an acquittal in a criminal court but where

Under the leadership of the Association of Chief Police Officers, guidance on policing domestic violence has been produced by CENTREX, the organisation responsible for

police training. It is one of the first guides to operational policing issued under the

auspices of the National Centre for Policing Excellence. One of its cornerstones is pro-active policing throughout a domestic violence case.

A crucial element of this is making full use of available powers of arrest. With the police taking the decision rather than placing the burden on the victim, which is good for police intervention, it lets the police decide to prosecute if the victim is not in the position to do so. In case her partner has threatened her and she is scared of what he might do to her and the children in some cases even what he will do to him self.

These days the Police will still have the discretion to arrest or not, but the clear expectation is that they will do so. This expectation is already backed up by a home office Circular and will be reinforced by a new Circular, which will be issued in advance of the implementation of the new Act measures during 2005.

package developed by CENTREX for Police on the matters of domestic violence. This is optional for existing officers but the good thing is that it is taught to all new recruiting officers.

To conclude, there has been allot of change in the way that police deal with domestic violence. Once there hands were tied behind there backs by legislation but now due to new laws made by the government, the police have much more powers to arrest and prosecute offenders or to use other methods like restraining orders have been made more accessible.

More so, in the past the police have had bad attitudes towards domestic violence. Due to the police system being mainly males and holding old perceptions that this is right for males to oppress and use violence to control and dominate women.

Although there are now various groups and organisations to help victims of this crime, and that there many new guidelines to aid officers and much more awareness of this matter. There is still a long way to go and this is due to the nature of this crime, you see that this is a hidden crime in the constraints of the home. To fully eradicate this we must empower women to believe that this is not tolerable not once not twice never and to give offenders more punishment and victims more rights, and finally educate not just the young but adults to of the dangers of this brutal crime.