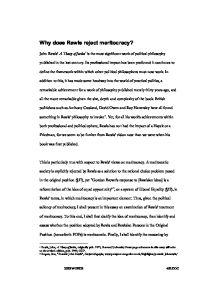 Why does Rawls reject meritocracy?

Why does Rawls reject meritocracy? John Rawls' A Theory of Justice1 is the most significant work of political philosophy published in the last century. Its professional impact has been profound: it continues to define the framework within which other political philosophers must now work. In addition to this, it has made some headway into the world of practical politics, a remarkable achievement for a work of philosophy published merely thirty years ago, and all the more remarkable given the size, depth and complexity of the book. British politicians such as Anthony Crosland, David Owen and Roy Hattersley have all found something in Rawls' philosophy to invoke2. Yet, for all his work's achievements within both professional and political sphere, Rawls has not had the impact of a Hayek or a Friedman, for we seem to be further from Rawls' vision now than we were when his book was first published. This is particularly true with respect to Rawls' views on meritocracy. A meritocratic society is explicitly rejected by Rawls as a solution to the rational choice problem posed in the original position (�17), yet "Gordon Brown's response to [Rawlsian ideas] is a reformulation of the idea of equal opportunity"3, or a system of Liberal Equality (�12), in Rawls' terms, in which meritocracy is an important element. Thus, given the political saliency of meritocracy, I shall present in this essay an examination of Rawls' treatment of meritocracy. To this end, I shall first clarify the idea of meritocracy, then identify and assess whether the position adopted by Rawls and Rawlsian Persons in the Original Position (henceforth POPs) is meritocratic. Finally, I shall identify the reasoning by which Rawls arrive at his generally anti-meritocratic position, and criticise certain assumptions Rawls makes in so doing. Meritocracy is not used today in the same sense as similar words like theocracy and aristocracy. Those who wish to bring about a theocracy or an aristocracy wish to install in power a certain group who exemplify certain attributes; namely, exemplifying certain religious values or being a member of a certain class. ...read more.

as part of a scheme which improves the expectations of the least advantaged members of society."13 Rather than meritocratic, this is a strongly egalitarian principle (though not as egalitarian as ensuring equality of outcome). It is anti-meritocratic in two senses: first, in characterising as unjust certain expectations of those with merit, this principle will give rise to a society that is anti-meritocratic in character. Second, it violates the principles of reward according to merit. Consider the following situation. State u State v State w Individual a 5 8 11 Individual b 5 8 8 Individual c 5 6 6 Individuals a, b, and c form a society. There are three possible states for a, b and c, and they are states u, v, and w. The numbers in the table represent cardinal values for each individual's expectations under each possible state. a's merit is greater than b's, whose merit is in turn greater than c's. Whilst a change from state u to state v is possible, since it benefits c, the least advantaged member of society, a change from state v to state w is disallowed by the difference principle, since it does not benefit c14. This violates the reward principle, since merit(a) is greater than merit(b), which is greater than merit(c), but reward(a) is not strictly greater than reward(b). This of course assumes a strong version of the reward principle, wherein reward must be ordered on the basis that each individual reward is strictly greater (less) than the next entry. But the redistributive consequences of Rawls' theory also violate the reward principle. Rawls views as corollaries of the principles of justice "taxation of inheritance and income at progressive rates", partly to secure a "social minimum"15. This redistribution attempts to ameliorate distribution patterned according to merit, and so is anti-meritocratic. Of course, Rawls' scheme is meritocratic in certain ways[CJH3]. However, it is difficult to see how these meritocratic elements could be avoided within the modern liberal democracy Rawls intends to justify. ...read more.

Rawls' objection might be as follows: one's natural assets as realised flow from one's natural assets. Yet one's natural assets are not deserved, and so one does not deserve one's natural assets as realised. One may counter this objection with a remark from Nozick, that "it is not true, for example, that a person earns Y (a right to keep a painting he's made, praise for writing A Theory of Justice, and so on), only if he's earned (or otherwise deserves) whatever he used (including natural assets) in the process of earning Y. Some of the things he uses he just may have, not illegitimately. It needn't be that the foundations underlying desert are themselves deserved, all the way down"22. However, this seems open to the objection that if we need not have foundations underlying desert that are deserved all the way down, then how far down must we deserve what underlies our desert? Instead, I argue that even if we do not deserve our natural efforts as realised, Rawls' arguments do not undermine the counter-argument that I deserve the fruits of my labours. This principle of desert is surely one of our considered judgements, and non-concordance with the two principles of justice surely means that the two principles of justice do not represent a reflective equilibrium. Where Rawls is, I believe, correct in arguing against merit as a basis for reward is that one cannot divide up the fruits of my natural assets as realised and apportion some part to the effort I put in to realise those assets, and so deserve 'in the ordinary sense', and apportion some other part to natural contingencies. Thus, Rawls' anti-meritocracy is based on an understandable concern about the effects of natural contingencies on reward. However, this concern is taken too far, and requires us to accept that there is no such thing as merit, since what we may think to be meritorious is in fact determined. 1 Rawls, John, A Theory of Justice, originally pub. ...read more.