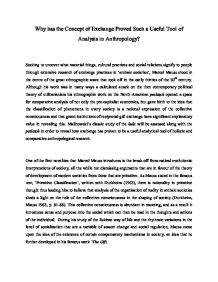 Why has the concept of exchange proven such a useful tool in anthropology?

Why has the Concept of Exchange Proved Such a Useful Tool of Analysis in Anthropology? Seeking to uncover what material things, cultural practices and social relations signify to people through extensive research of exchange practices in 'archaic societies', Marcel Mauss stood in the centre of the great ethnographic wave that took off in the early thirties of the 20th century. Although his work was in many ways a calculated attack on the then contemporary political theory of utilitarianism his ethnographic work on the North-American potlatch opened a space for comparative analysis of not only the pre-capitalist economics, but gave birth to the idea that the classification of phenomena in every society is a rational expression of the collective consciousness and that grand institutions of reciprocal gift exchange have significant explanatory value in revealing this. Malinowski's classic study of the kula will be assessed along with the potlatch in order to reveal how exchange has proven to be a useful analytical tool of holistic and comparative anthropological research. One of the first novelties that Marcel Mauss introduces is the break-off from radical evolutionist interpretations of society, all the while not dismissing arguments that are in favour of the theory of development of modern societies from those that are primitive. ...read more.

456) - the Maori hau - signifying a total unity of the spiritual and material (Parry 1986, p. 456-47), By engaging the honor of both participants, the seemingly simple act of gift exchange created relations and alliances which were binding and everlasting, compelling partners to always return an equally or more valuable gift for the one they received, and in such a way retain their status within society. The exchange of 'use-less values' in the kula expresses the basic principle that this exchange relies on - to own means to give. Therefore, objects are never in one place for too long, they go around from owner to owner, acquiring a history and with it their value. Along similar lines, Mauss places a focus on studying the network of relations and interdependencies that keep a collective together, moving exchange away from the utilitarian debate on self-interest (Parry 1986). Gift-exchange, according to Mauss has a 'voluntary character, so to speak, apparently free and without cost, and yet constrained and interested... They are endowed nearly always with the form of a present, of a gift generously offered even when in the gesture which accompanies the transaction there is only a fiction, formalism and social deception, and when there is, at bottom, obligation and economic interest' (Mauss 1973 cited Parry 1986: 456-7). ...read more.

at a designated time, an institution that is rooted in myth, based on traditional laws and religious rituals and regulated by a strict set of rules (Malinovski 1979, p. 76). Although the kula occurs between tribes of different language and culture, it is founded on partnerships that are created through participation in it, bonds that are lifelong and which tie together thousands of individuals assuming numerous mutual obligations and rights, thus giving a specific shape to inter-tribal relations. Although gift-exchange provides us with the possibility to place under scrutiny the economic exchange and trade that exists alongside it as a derivative of the great institution of giving and receiving, it also sheds light on a wider set of socio-cultural phenomena. The gift carries with it a complex system of social and legal values, or in other words it represents a 'fait social total' - a total prestation (Mauss 1954, p. 3) that puts into motion the whole of society and it's institutions taking place between groups that exchange goods, services, rituals, women, names... Opposing the economistic discourse that reduces exchange in primitive societies to pure barter, this mode of analysis inspired an extensive field of research in anthropology by placing the social into it's rightful place in economic exchange. ...read more.