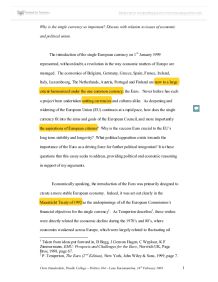 Why is the single currency so important? Discuss with relation to issues of economic and political union.

Why is the single currency so important? Discuss with relation to issues of economic and political union. The introduction of the single European currency on 1st January 1999 represented, without doubt, a revolution in the way economic matters of Europe are managed. The economies of Belgium, Germany, Greece, Spain, France, Ireland, Italy, Luxembourg, The Netherlands, Austria, Portugal and Finland are now to a large extent harmonized under the one common currency, the Euro. Never before has such a project been undertaken uniting currencies and cultures alike. As deepening and widening of the European Union (EU) continues at a rapid pace, how does the single currency fit into the aims and goals of the European Council, and more importantly the aspirations of European citizens? Why is the success Euro crucial to the EU's long term stability and longevity? What political opposition exists towards the importance of the Euro as a driving force for further political integration? It is these questions that this essay seeks to address, providing political and economic reasoning in support of my arguments. Economically speaking, the introduction of the Euro was primarily designed to create a more stable European economy. Indeed, it was set out clearly in the Maastricht Treaty of 1992 as the underpinnings of all the European Commission's financial objectives for the single currency1. As Temperton describes2, these wishes were directly related the economic decline during the 1970's and 80's, where economies weakened across Europe, which were largely related to fluctuating oil prices worldwide. ...read more.

Davidson6 puts forward a pro-integration perspective by describing states within the Euro as having a stronger political position in Europe for future political policy making. He goes on to describe monetary union as a heavily political step rather than purely economical initiative, and blames the UK for taking such a cynical stance. Davidson suggests that further integration would primarily run on financial lines as political issues such as common defence and security carry a more heated atmosphere. Indeed, there is much to be said for this perspective. For instance, it would be logical to assume that monetary integration is somewhat of a forerunner to further integration politically and gives added weight to the concept of a 'United States of Europe' being realised at some future point. If success is achieved, this could provide the green light for more far reaching measures that are at present taboo subjects by providing evidence that integration can work. The Euro is effective in doing this by creating common ground for participating states across Europe. This takes form in many different ways. For example, assuming that political integration between states is possible, European citizens simply having a single currency across a large number of key states allows for easier price comparison7. This relatively small incentive goes a long way to furthering the feeling of integration between Europe's citizens of different countries. ...read more.

This is a good essay - at my Russell Group University it would probably gain a low 2.1 (as a first year essay). The major things it's missing are a consideration of a) the historical context of EMU (the snake, EMS etc), b) the political-economic costs and benefits (loss of monetary autonomy and why in the context of EMS this wasn't seen as a loss) and the Franco-German relationship. All of these factors explain why 'stability' - the factor the author's latched onto - is so important.

Nonetheless this is internally cohesive and mostly factually correct, which is a good start for a first year EU essay!