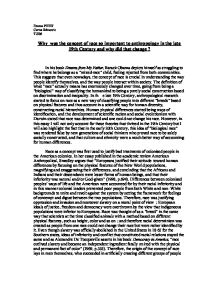 Why was the concept of race so important to anthropology in the late 19th Century and why did that change ?

Emma PETIT Carna Brknovic TU06 Why was the concept of race so important to anthropology in the late 19th Century and why did that change ? In his book Dreams from My Father, Barack Obama depicts himself as struggling to find where he belongs as a "mixed-race" child, feeling rejected from both communities. This suggests that even nowadays, the concept of race is crucial in understanding the way people identify themselves, and the way people interact within society. The definition of what "race" actually means has enormously changed over time, going from being a "biological" way of classifying the humankind to being a purely social construction based on discrimination and inequality. In th e late 19th Century, anthropological research started to focus on race as a new way of classifying people into different "breeds" based on physical features and thus account in a scientific way for human diversity, constructing racial hierarchies. Human physical differences started being ways of identification, and the development of scientific racism and social evolutionism with Darwin stated that race was determined and one could not change his race. However, in this essay I will not only account for these theories that thrived in the 19th Century but I will also highlight the fact that in the early 20th Century, this idea of "biological race" was rendered false by new generations of social thinkers who proved race to be solely socially constructed, and that culture and ethnicity were a much better way of accounting for human differences. ...read more.

Most of the anthropological milieu in the end of the 19th century based their research on the "comparative method" that uses the primitive societies as examples of their how their own societies used to be hundreds of years earlier ; therefore saying that every human society will develop itself in the same way as there is an uniformity of the "laws of nature". American anthropologists especially tried to establish a universal scheme of mental evolution that would explain the shift from what they called " savagery, barbarism and then civilisation ". Lewis Morgan the most influential anthropologist in this domain argued that the human mind had been "guided by a natural logic which formed an essential attribute of the brain itself" (1964, p.234) which explained the common progression of all societies towards progress in the Western sense. Herbert Spencer on the other hand, saw the difference is lifestyle between Western and non-Western societies as explained by their political and social environment and explained their under-development by a circular Larmackian process which meant that they were trapped in their own savage way of life because development and progress for him only came when "societies grow, become organised, and gain stability that there arise those experiences by assimilating which the powers of thought develop" (1969, p.92). Therefore, to summarize the late nineteenth century currents of thought, anthropologists were interested in explaining differences between primitives and Western societies and particularly in what they called the " ...read more.

Although it is quite evident that there are some differences between African and Asian people, the concept of race being taboo it is really difficult to account in a scientific way about this diversity. Today what prevails is the concept of ethnicity as something more accurate to describe different groups of people as it also encompasses the notions of a shared cultures, norms, customs. To conclude, the concept of race was very important in the late 19th century for anthropology because it provided scientists with a new way of classifying people and accounting for the extraordinary human diversity ; based on purely empirical evidence of different head forms, sizes, height and so on. It initially was born in Nort America as a jusitification of the bad treatment of the colonized and the slaves but became a widespread assumption very quickly after that. Theories of social evolutionism explained the difference of development between various races as being the result of a lesser developed mind and set of thinking skills, which was based on examples of European heads being bigger than savages' head therefore more powerful. At the beginning of the 20th century, figures like Franz Boas started to criticize this world-view and argued that race was not biologically founded but that human body was shaped by its environment. This way, people started to think of race as a purely social construct which could be accounted more on discrimination and inequalities than on physical differences. Nowadays, social scientists focus more on ethnicity and culture as ways of classifying human groupings. ...read more.