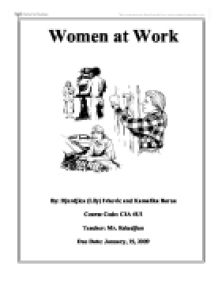 Women at Work By: Djurdjica (Lily) Ivkovic and Kamalika Barua Course Code: CIA 4U1 Teacher: Mr. Eskedjian Due Date: January, 15, 2009 Women and Work Throughout the 20th century women have had to fight harder to get ahead in the male owned workplace. With obstacles such as discrimination, lower wages, and the lack of management positions, it's hard for women to compete with men. Women of work is one of the important topics to discuss about, from day to day people don't realize many obstacles that women faced. This report will further outline the history of women which will help us understand the past. It will focus on the changes many women faced throughout the centuries as well as it will discuss women's work in other countries and ways of overcoming these obstacles. History Women's paid work in the nineteenth century Until confederation, Canada was a sparsely populated colony whose economy was based on farming, fishing, lumbering and fur trading (Wilson). Ontario and Quebec were the first to industrialize (Wilson). Both men and women earned money to buy things the family did not produce themselves (Wilson). Farmers earned seasonal income in fur trade, lumbering, or fishing; their wives sold or exchanged any extra vegetables, butter, cheese, eggs etc (Duby). Unmarried daughters, some widows and some married women worked in homes of wealthier neighbors if their labour was not needed at home (Duby). As Canada became more urbanized and more industrialized, home production declined with it women's economic contribution to the household (Women in the). Last half of nineteenth century created opportunities for paid employment for men and some single women (Wilson). In urban areas there were more employment opportunities for single women, and increasing number of whom worked until marriage. In 1921, 70% of working women were between the ages of 14-24 years old (Wilson). The majority of the employed single women worked in domestic services until well into the twentieth century (Women in the). ...read more.

Yet women often get little recognition for that. In fact, many go unpaid. It is very difficult for these women to get the financial resources as many societies still do not accept, or realize, that there is a change in the traditional roles. Reasons for such inequality include the fact that women are generally underpaid and because they often perform low-status jobs, compared to men. Unpaid work is perhaps the biggest contribution that women make to the economy. In Canada unpaid work is estimated to be worth up to $319 in the money economy or 41% of GDP (Shah). In societies where education is offered on a higher levels like in Canada, the economic possibilities for women are much greater than in those societies where education for women is limited and gender inequality exists at home for example in Africa. In countries where women are starting to take place in the economy, segregation and harassment exists on all levels. Some parts of Africa, where education is still being denied to women, it is clearly seen that the working possibilities offered to women are limited to food production, agriculture and market trade (Shah). This not only creates a problem where most women are excluded from the modern work opportunities but also that women who do work with the economy that is being offered to them, are not recognized as part of the work force. However because education is limited in most countries of Africa, most women find employment that does not get calculated into the national statistics (Shah). Where employment of women goes unrecognized, it has been approximated that 60% of the market trade in Africa is done by women. In addition to working in market trade, approximately 80% of rural women find themselves working in agriculture and a great deal in house-related employment (Shah). Although a great number of production is carried out by women, because it is not considered employment, working women are usually overlooked, underestimated and oversimplified. ...read more.

Many have just not had the opportunity and may have an unrealistic understanding of the skills and knowledge required to successfully operate a computer (Heithfield). Work with your local elementary school, middle school, high school, community college, and college to ensure that programs and educational opportunities are in place that exposes girls to technology, math, and science, in addition to the helping careers (Heithfield). Ensure that clubs, science project competitions, and all other opportunities, reach out equally to girls. Social equality for women will increase social equality for men (Heithfield). For example, when employers recognize family responsibilities as a legitimate reason for benefits and time off, this advance will help both men and women in the workforce. There will be greater flexibility for men to take care of their children and sick or elderly relatives. The labour market will become more people-oriented (Heithfield). Conclusion Overall as you can see, this report has shown how women are still facing discrimination, inequality and lack of management positions in some parts of the world. Despite the gains of the past century, Canadian women continue to face many challenges in the new millennium. Some of those challenges include: balancing work and family responsibilities, recognition for the unpaid care giving work as well as eliminating the wage gap between women and men. Although this discussion of the history of women's paid work has been brief, it demonstrates the extent to which current patterns are entrenched. In the first half of the twentieth century, increasing numbers of women entered the paid labour force, and until World War II the vast majority of these women were single. The combination of inflation, improvements in household technology, smaller family size, and shorter working attitudes has encouraged the employment of married women since mid-century. Women are still facing some obstacles today such as earning an average of 72 cents for every dollar that a man is earning. Such problems can be solved if employers start realizing the inequality that women are still facing and are acting upon them. ...read more.