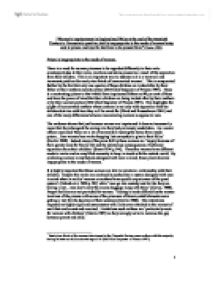 &quot;Women's imprisonment in England and Wales at the end of the twentieth Century is: Excessively punitive; totally inappropriate to the needs of women being sent to prison; and ripe for abolition in its present form&quot;(Carlen 1998)

"Women's imprisonment in England and Wales at the end of the twentieth Century is: Excessively punitive; totally inappropriate to the needs of women being sent to prison; and ripe for abolition in its present form" (Carlen 1998) Prison is inappropriate to the needs of women. There is a need for women prisoners to be regarded differently to their male counterparts due to their roles, reactions and stress caused as a result of the separation from their children. This is an important area to address as it is a very real and immanent problem for nearly two thirds of incarcerated women 1. This is exasperated further by the fact that only one quarter of these children are looked after by their father or their mothers current partner (HM Chief Inspector of Prisons 1997). These is a contrasting picture to that which faces imprisoned fathers as 90 per cent of these and have the peace of mind that their children are being looked after by their mothers or by their current partner (HM Chief Inspector of Prisons 1997). This highlights the plight of incarcerated mothers whose concern is not only with separation with her children but also with how they will be cared for (Ward and Kaussebaum 1965) and one of the many differences between incarcerating women as oppose to men. ...read more.

Simple alterations and achieving consistent standards across all prisons would ensure imprisonment would be a more humanistic experience. There were also frequent complaints about the regimes that the imprisoned women had to undertake as these failed to allow the mothers to develop their own methods of baby care (Devlin 1998; Carlen 1998, NACRO 1991). Dobash et al highlight that 'regimentation is the characteristic feature...life in these unit is as regulated for the babies as it is for the mothers' (Dobash et al 1986 p.198). This is a very negative aspect of the mother and baby units as such regimentation can reduce what little confidence some of the mothers already have in their abilities to cope with their babies outside prison (Carlen 1990). As a direct result of this, both in cases where the child is allowed to stay with the mother and those where the mother and child are separated, the woman is denied the right to be a mother to their child(ren). Should this be prohibited, therefore adding a further harrowing aspect to their imprisonment, or should this sanction remain the punishment that it is meant to be - the deprivation of liberty? Although we can see that the conditions are at least unfavourable, there are steps that could be taken to improve these. More worryingly perhaps is the lack of stimulation that the babies received and the long-term effects that this can have. ...read more.

It appears from the above that women who may be criminal are presumed to be mentally ill, if this was so it can be further presumed that officials believe that the best place for these women is prison. The Thematic Review (HM Chief Inspector of Prisons 1997) certainly acknowledge that custody is not the best setting for therapeutic work, even for those who are incarcerated and suffer from mental health problems as these can be 'worsened by the effects of imprisonment' (NACRO 1991). Therefore the inappropriateness of prisons as a form of punishment for women can be seen whichever way we choose to look at this problem 1 Nearly two thirds of the women interviewed in the Thematic Review were mothers with the majority having at least one child under the age of 16 (HM Chief Inspector of Prisons 1997). 2 Carried out by the Department of Health in November 1996, Inspection of facilities for mother and babies in prison. 3 This monitored the physical and psychological development of babies between one and eighteen months old who accompanied their mothers into mother-and-baby units compared with those of a similar age who were separated from their mothers and cared for by relatives or others. This research was carried out by Sussex university, commissioned by the Home Office 1 1 ...read more.