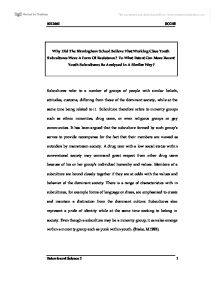 Why Did The Birmingham School Believe That Working Class Youth Subcultures Were A Form Of Resistance? To What Extent Can More Recent Youth Subcultures Be Analysed In A Similar Way? Subcultures refer to a number of groups of people with similar beliefs, attitudes, customs, differing from those of the dominant society, while at the same time being related to it. Subculture therefore refers to minority groups such as ethnic minorities, drug users, or even religious groups or gay communities. It has been argued that the subculture formed by such group's serves to provide recompense for the fact that their members are viewed as outsiders by mainstream society. A drug user with a low social status within conventional society may command great respect from other drug users because of his or her group's individual hierarchy and values. Members of a subculture are bound closely together if they are at odds with the values and behavior of the dominant society. There is a range of characteristics with in subcultures, for example forms of language or dress, are emphasized to create and maintain a distinction from the dominant culture. Subcultures also represent a pride of identity while at the same time seeking to belong in society. ...read more.

(Brake, M 1993,pp9) The teddy boys had a desire to rebel and so forced into crime. The teddy boys became responsible for everything and were a product of society, who in spite of everything believed that the middle classes were entitled to push standards on a class whose whole way of life was completely different ever since its older generation used the war as their reason to lay down the law, as a consequence to lead an education that only ended in dead-end jobs.(Hebdige, 1979) Next were the mods they wore the latest fashions from Italy, yet, were backward looking only riding on scooters, still they seemed to manage with their social and working lives. Their appearance was simple wearing parka jackets, with short neat hair and they were seen to reflect a hip image. The girls in the gang were stylish, reflected in the latest fashions. They were tough and rebellious towards their older generation although their image was smart, their wild image was remembered when the mob gangs travelled to Brighton and caused trouble using their scooters as a weapon and a basis of solidarity. (Cohen, 1980) ...read more.

The fact that recent subcultures have lead to rebellious consequences with the government, it is unlikely that the political view of British youths will shift, if Britain remains a society set apart by discrimination in class. On the other hand, rebellious subcultures, trends, culture and growing relationship between lower class community's rebellious youths are set to stay. This is due to advanced developments within media, technology and global marketing around the world.(Willis, 1990) In conclusion by examining music, dress and the style of youths, it is clear that they are creating their own sub-cultural styles and identity, these were potential for social change and the reason for crime and rebellious behaviour of youths from working class communities. The Birmingham School were holey interested in the ways in which members of subcultures invent style by selecting and reassemble various cultural formed in dominant society. BIBLOGRAPHY Brake, Michael. (1991) Comparative youth Culture: the Sociology Of Youth Subcultures in America. London: Routledge. Cohen, Stanley. (1980) Folk Devils and Moral Panics. London: MacGibbon and Kee. Garfield, S. (1994) The End Of Innocence. Faber: London. Heaven, Patrick. (2001) The Social Psychology Of Adolescence. Hampshire: Palgrace. Hebdige, D. (1979) Subculture, The Meaning Of Style. London: Metheum. Springhall. (1998) Youth, Popular Culture & Moral Panics: Penny Gaffs to Gangsta rap 1830-1996. Basingstock: MacMillan. Willis, P. (1990) Moving Culture. London: Gulbenkian. ...read more.