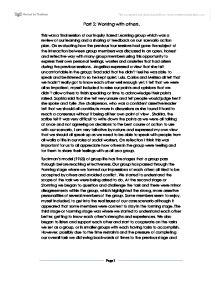 This was a final session of our Inquiry Based Learning group which was a review of our learning and a sharing of feedback on our scenario action plan. On evaluating how the previous four sessions had gone the subject of the interaction between group members was discussed in an open, honest and reflective way with many group members using this opportunity to express their own personal feelings, worries and anxieties that had arisen during the previous sessions. Angelina expressed a view that she felt uncomfortable in the group; Brad said that he didn't feel he was able to speak and be listened to so he kept quiet; Lulu, Carlos and Melissa all felt that we hadn't really got to know each other well enough yet; I felt that we were all so impatient, myself included to raise our points and opinions that we didn't allow others to finish speaking or time to acknowledge their points raised. ...read more.

Our group has passed through the Forming stage where we formed our impressions of each other; all tried to be accepted by others and avoided conflict. We started to understand the scope of the task we were being asked to do. At the second stage or Storming we began to question and challenge the task and there were minor disagreements within the group, which highlighted the strong, more assertive personalities of several members of the group. Some members seem to enjoy, myself included, to get into the real issues of our case scenario although it appeared that some members were content to stay in the forming stage. The third stage or Norming stage was where we started to understand each other better, getting to know each other's strengths and experiences. We also began to listen and support each other and start to cooperate on the tasks we set as a group, or in smaller groups with each having tasks to accomplish. ...read more.

Our second case scenario did progress more smoothly with better communication and improved listening between the group members. Small conflicts were out in the open and dealt with, possibly as more trust was being built up between the group members. In practice with our service users and in dealing with other professionals in multidisciplinary working it will not always be possible to network and build a social relationship ; also to feel entirely comfortable in all situations with all people and in group meetings. But as a professional we have to ensure that we talk openly with everyone and respect others opinions, giving them validity. There will always be differences of professional opinion between one profession to another and we may need to be assertive at times, learn how to manage conflict in an honest and open manner. Effective working relationships are based on trust and respect and it is a skill that we have to learn to interact and communicate effectively to share our knowledge, skills and expertise with all parties for the benefit of our service users. ?? ?? ?? ?? Part 2: Working with others. Page 1 ...read more.

A reflective account of work within a group. Some interesting points were raised highlighting the different personalities often seen in a group. There was a good link to Tuckman - don't forget to reference the literature. Take some time to reflect on why individuals behaved as they did, eg. how did the different personalities impact on each other?

The writing style was good overall, just a few grammar errors which could be minimised by careful proof-reading.
3/5