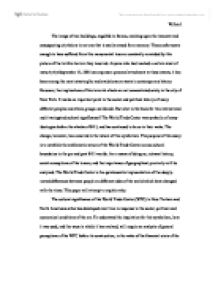 World Trade Center: A Symbol of Power, Inequality and Conflict

The image of two buildings, engulfed in flames, crashing upon the innocent and unsuspecting city below is not one that is easily erased from memory. Those unfortunate enough to have suffered from this monumental loss are constantly reminded by this picture of the terrible horrors they incurred. Anyone who had reached a certain level of maturity by September 11, 2001 can express a personal attachment to these events; it has been among the most catastrophic and evolutionary events in contemporary history. However, the implications of this terrorist attack are not concentrated solely in the city of New York. It marks an important point in the social and political history of many different peoples and ethnic groups worldwide. But what is the basis for this international multi-variegated cultural significance? The World Trade Center was symbolic of many ideologies before the attacks of 9/11, and has continued to be so in their wake. The change, however, has occurred in the nature of this symbolism. The purpose of this essay is to establish the emblematic nature of the World Trade Center across cultural boundaries in the pre and post 9/11 worlds. As a means of doing so, relevant history, social conceptions of the towers, and the importance of geographical proximity will be analyzed. The World Trade Center is the quintessential representation of the deeply-rooted differences between people on different sides of the world which have changed with the times. ...read more.

In the Muslim world, to those with a negatively inclined view of the implications of neoliberal free markets and globalizing forces, the tower represent something more sinister. They represent, "the callous disregard of U.S. financial and commercial interests for global poverty and suffering; the militarism that backs authoritarian regimes wherever convenient...the insensitivity of U.S.-led globalization," (Harvey 60). Inasmuch as it became an effective and successful symbol of New York's, and by extrapolation America's rising power, it equally grew to represent the inequalities and injustice of the massive gap between rich and poor. The towers' symbolism also seemingly motivated the terrorists in their choice of targets for the attacks of September 11. Osama Bin Laden, "in his internationally broadcast remarks of October 7," celebrated the attacks on the WTC and the Pentagon as simply, "the destruction of America's greatest buildings," and by extension, the embodiments of American power. The dramatic fashion in which it occurred, by flying planes into the giant skyscrapers, was likely an effort to instill fear in the most universally and culturally recognizable terms possible, and it was, "recorded by thousands of cameras and broadcast within minutes to screens worldwide," (Greenberg 386). The image of the flaming towers has become of great historical significance as it has come to represent the real and comprehensible horrors of international terrorism. ...read more.

The image of the WTC had garnered resentment among the peoples it's values directly afflicted. The destruction of a key financial center was not as troubling as the sinister political and ideological ultimatum that had been sent. This is the truest and most implicit cultural interpretation of the towers. The World Trade Center has diverse and multitudinous social, cultural, political, historical, economical, and most importantly, ideological implications. Over time and with the onslaught of foundation-rattling events these implications have evolved beyond the point of recognition. Since its construction, with the financial crisis of 1975, and after September 11th the dynamic of cultural significance has changed. In an equal sense, as international borders are crossed the towers have entirely different meanings. The temporal and spatial relevance of the twin towers as a symbol make it of international importance. To Americans, and those closely associated, the WTC has been representative of pride, strength, fiscal power, resiliency, resurgence, tragedy, awareness and moving forward. To the fundamentalists that flew the planes, and their culturally and politically associated groups, the towers symbolized oppression, inequality, hegemony, revenge and conflict. While there is no real way to categorize these meanings, it is undeniable that they have played an important role in the evolution and development of the contemporary world. The World Trade Center, with all its varying interpretations, is of great cultural significance to all regions of the globe. This essay has attempted to explain why. ...read more.