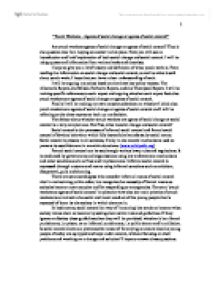 The very fact that the youth were described as upsetting the natural 'order' of things was very clear in that Albemarle wanted the youth workers to be agents of social control. The raw foundation for youth work was introduced in the Albemarle Report. The four principle recommendations really got the ball rolling. However, one of these recommendations states that the Minister of Education should take the steps to increase the exiting force of full time leaders. What this is saying is that youth workers should lead my force and not through understanding, empathy trust etc. This is summed up by the way that an army graduate was straight away qualified as a youth leader. That whole idea boils down to one simple aspect, discipline. If a young person is disciplined then it will fulfil the role that society expects from them. The argument above states that the Albemarle Report quite obviously veers towards youth workers being agents of social control, however, it recognises that a change is needed. A contrasting view comes from the Milson-Fairbairn Report. This report was sceptical of the extent to which community schools could represent the full range of community interests. The aim of the report reads, " It is the critical involvement of young people in a society which seeks to be compassionate and participant." (Lecture Pack). The report acknowledges that there have been significant changes since the Albemarle Report and there are still debates concerning many issues. ...read more.