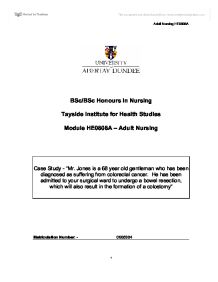 BSc/BSc Honours in Nursing Tayside Institute for Health Studies Module HE0808A - Adult Nursing Case Study - "Mr. Jones is a 68 year old gentleman who has been diagnosed as suffering from colorectal cancer. He has been admitted to your surgical ward to undergo a bowel resection, which will also result in the formation of a colostomy" Matriculation Number: - 0605304 * Introduction Background Colorectal cancer is the second most common cause of cancer-related deaths in the UK (Brooker, 2005); and this paper aims to discuss the treatment and care of a 68 year old gentleman who has been admitted for colostomy forming surgery. Consideration will be given to both the pre-operative and post-operative care that Mr Jones will receive; and we will discuss the factors surrounding his physical and emotional well being. Aetiology & Pathophysiology The lumen of the colon is lined with many cells which are subject to constant turnover. Adenocarcinomas form when too many dysfunctional cells lining the colon create a tumour (Whittaker, 2005). The exact cause of colorectal cancer is unclear (Alexander et al, 2006); however diet is thought to be the most important factor (Waugh & Grant, 2006). The symptoms of colorectal cancer vary depending on the area of the bowel affected (Brooker, 2005). The symptoms of right sided tumours usually include: anaemia, weight loss, abdominal mass, ill-defined abdominal pain, and changes in bowel habit (Borwell, 2005). Left sided tumours usually present with symptoms such as: colicky abdominal pain, abdominal distension, alternating bowel habits, plus mucus and/or blood in the patients' stool (Borwell, 2005). Treatment of Colorectal Cancer Treatment depends on the stage of the cancer and the prognosis of the disease (Whittaker, 2005). ...read more.

The level of Mr Jones' comprehension with regards to his procedure and prognosis should be constantly monitored by the nurse to ensure he knows what to expect (Dougherty & Lister, 2004). All too often the patient and their family are so emotionally overcome that they do not grasp all that has been said. The nurse can determine what information has been given, then, in simple terms; can repeat any necessary information (Walsh, 2002). Usually, surgeons will prescribe a bowel preparation 1-2 days before the operation to reduce the risk of infection from faecal contamination (Borwell, 2005). These preparations can include Fleet, Picolax or Klean-prep and ensure the bowel is free of any solid contents (BNF, 2007). In addition, Mr Jones will be not be allowed any food or fluids 4-6 hours prior to surgery, in order to avoid the risk of regurgitation and inhalation of gastric contents whilst under the anaesthetic (Jamieson, 2002). However the undesirable results of prolonged fasting are dehydration and electrolyte imbalance, particularly in older patients; which may potentially render them unfit for surgery. To prevent this; intravenous fluids may be prescribed if Mr Jones displays any signs of dehydration (Alexander et al, 2006). If Mr Jones is particularly anxious the anaesthetist may prescribe a "premed". This is a drug such as diazepam which constitutes to part of the anaesthetic. It is used to relax and relieve anxiety; and will be given just before Mr Jones leaves the ward for theatre (Alexander et al, 2006). In addition to the previous information, most hospitals also employ a standardised checklist which is completed on the morning of surgery and includes the following criteria: - * Ensure Mr Jones is wearing an identification band with the correct information (Dougherty & Lister, 2004). ...read more.

Once Mr Jones is able to meet this criteria the nurse can then organise the appropriate support for his discharge such as transport and community services (Brooker & Nicol, 2003). * Conclusion This paper has endeavoured to provide a broad but brief insight into the holistic care provided for Mr Jones during his colostomy forming surgery. However, there are numerous factors to consider and due to the word allowance of this assignment it was not possible to mention them all in detail. The main aspects for a nurse to remember are that pre-operatively the focus must be on the psychological welfare of Mr Jones; and his understanding and acceptance of the stoma is required to enhance a speedy recovery (Porrett & McGrath, 2005). To ensure this, the nurse must educate, reassure and more importantly listen to Mr Jones as he expresses his fears, and asks questions (Dougherty & Lister, 2004). One of the most important aspects of care to remember is that of therapeutic relationships. By being supportive, listening to, and acknowledging the patients fears, by offering good clear explanations, and building trust; nurses can make a positive difference to the patients experience (Walsh, 2002). Post operatively the nurse must shift their focus to the physical care of Mr Jones, ensuring that his vital signs and wounds are monitored regularly; and any problems reported immediately (Porrett & McGrath, 2005). The complications with regards to Mr Jones' acceptance of the stoma should be minimal, as long as the training and support he received pre-operatively was adequate (Alexander et al, 2006). However, constant assessment of Mr Jones' psychological state should be made to ensure he is coping. And finally; to ensure adequate rehabilitation occurs at home, the nurse must make the appropriate referrals and supply the correct level of community support to Mr Jones' upon his discharge. ...read more.